Two Mysterious Openings Found in the Great Pyramid of Giza

A project called Operation ScanPyramids recently completed a year-long innovative scan of the Great Pyramid and has uncovered two mysterious openings never seen before. The technique used by the researchers is just as mysterious as the openings. Are the openings  evidence of the long-rumored secret passages into or out of the 4,500-year-old wonder?

We are now able to confirm the existence of a 'void' hidden behind the north face, that could have the form of at least one corridor going inside the Great Pyramid.

In the announcement released last week by Operation ScanPyramids, researchers from Cairo University's Faculty of Engineering and the Paris-based non-profit organization Heritage, Innovation and Preservation (HIP Institute) under the authority of the Egyptian Ministry of Antiquities, revealed the discovery of not one but two unknown cavities in the 4,500-year-old Great Pyramid at Giza. The first is about 345 feet (105 m) above the ground on the northeastern edge of the pyramid while the second is behind the northern side at the upper part of the entrance gate.

Mehdi Tayoubi, founder of the HIP Institute, and other researchers refer to the opening as “voids” or “anomalies” because they don’t really know what they are yet. The ScanPyramids project found them using a mysterious technique called muography. Muons are particles from the upper layers of the atmosphere created from collisions between cosmic rays from outer space and atmospheric atoms.

Just like X rays pass through our bodies allowing us to visualize our skeleton, these elementary particles, weighing around 200 times more than electrons, can very easily pass through any structure, even large and thick rocks, such as mountains. Tayoubi’s team put aluminum emulsion plates inside the pyramid to collect the particles. By comparing the amounts of cosmic particles that passed through the pyramid’s stone structure, they can determine its density and locate passages and openings. The cavity they found on the northeastern edge is estimated to be about 30 square feet (2.8 square meters) but the exact shape has yet to be determined. 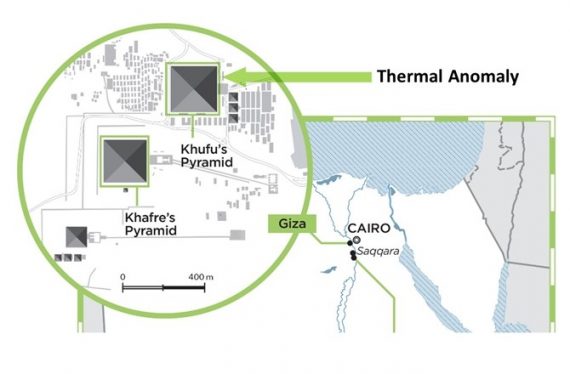 While some experts believe the two openings may lead to hidden passages or rooms, Zahi Hawass, Egypt’s former Minister of Antiquities, isn’t so sure.

Is Hawass saying that as an antiquities expert or as someone who wants to keep new knowledge of the Great Pyramid from leaking to the public? We may find out soon. Hawass and his antiquities committee approved the ScanPyramids Operation’s request to extend the project for another year.

The last Wonder never stops keeping us in wonder.

The Ustica Massacre: What Brought Down Itavia Flight 870?