Aliens! Exactly 234 planets full of them!

OK, now that we’ve gotten THAT out of the way, the news is still pretty interesting, if not quite as dramatic … yet. Using data collected from 2.5 million stars, a graduate student searched for evidence of periodic brief bursts of light that might be some sort of a signal. After four years of searching, he found 234 of them. Is this evidence of 234 aliens sending us messages or just proof that you can get graduate students to do anything?

The kind of energy needed to generate this signal is not crazy. 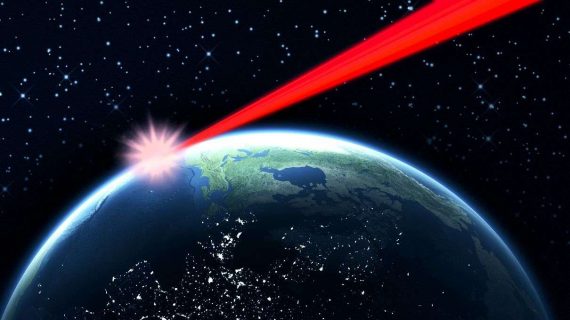 Astronomer Ermanno Borra from the Laval University in Quebec used that logic in 2012 to theorize that extraterrestrials could use a flashing laser beam to signal their existence to other life forms … like us. In fact, Borra said that the Helios laser at the Lawrence Livermore National Laboratory could generate just such a signal should we want to send out a similar message to alien civilizations to come and visit us.

That’s all Borra needed to convince graduate student Eric Trottier to search the Sloan Digital Sky Survey database for strobe-like bursts of light (with a 1.65 picoseconds periodicity) from other stars. According to their results, accepted for publication in PASP - the technical journal of the Astronomical Society of the Pacific (ASP) – exactly 234 stars emitted such signals. Needless to say, Borra was excited.

We have to follow a scientific approach, not an emotional one. But intuitively – my emotion speaks now – I strongly suspect that it’s an ETI signal.

Aliens! Exactly 234 planets full of them!

Wait a minute. Did he say ‘intuitively’? Yes he did and that word, plus some healthy doses of skepticism, have caused other scientists to question the conclusion, although not necessarily the findings.

It’s an incredibly profound subject—and of course that’s why many of us devote our lives to the field and put so much energy into trying to answer these questions. But you can’t make such definitive statements about detections unless you’ve exhausted every possible means of follow-up.

Andrew Siemion, director of the SETI Research Center at the University of California Berkeley, is willing to study Borra and Trottier's results further. His Breakthrough Listen Initiative will look at a select ground of stars from Borra’s sample in an attempt to see the signal again. Right now, Siemion thinks the data is so strange that it points to human errors in analysis rather than a new discovery. But he’s not ruling it out … yet.

Until then, it’s best just to whisper “Aliens! Exactly 234 planets full of them!”

Two Mysterious Openings Found in the Great Pyramid of Giza