A meteorite is a meteorite … except when it appears in Siberia, especially around the mysterious Lake Baikal where another mysterious meteorite made a bull’s-eye landing almost exactly one year ago (October 22, 2015). Meteorites are so common in this area that the Russian government has set up unmanned tracking stations to provide an early warning to residents of a possible catastrophe. This one came in without such a warning. Was it really a meteorite?

The bright green flash trailing a tail was spotted, recorded and photographed by many witnesses at around 19:30 (7:30 pm) on October 27, 2016. The object was recorded by many of the ubiquitous dash cams installed on Russian motor vehicles. Some reports say it exploded like a bolide.

It flew within five seconds, and disappeared over Lake Baikal. I think it burned down in the atmosphere.

What was it? There was no report by the tracking stations of a meteorite. One report by multiple witnesses put it near Goryachinsk, a resort village on the eastern shore of Lake Baikal.

In the area of Goryachinsk we saw a sharp light of bright green color. And then we saw the object flying, leaving behind a trail. 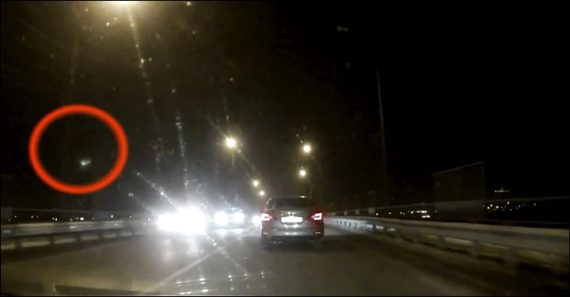 This is Russia, so the first thought is not meteorite or alien spacecraft but missile. Many speculated it was a missile launched from the airbase in Orenburg on the border with Kazakhstan towards the Kura Missile Test Range on the Kamchatka peninsula on Russia’s far eastern border. That would take it over Lake Baikal. However, the most recent launch of a Russian ICBM RS-18 intercontinental ballistic missile occurred several hours before this sighting. Despite that, Liliya Mironova, the head of the Astronomical Observatory at Buryat State University in Ulan-Ude, insists it was man-made.

I can say with certainty that it was not a meteorite, nor a meteor or a comet. It is clear that we are talking about some sort of man-made object.

Without doubt, we are talking about a space bolide. We can assume that the size of the meteor was about 50 centimeters. It may well be that it was not all burned out and some small stone debris could fall to the ground.

The confusion is understandable. The destructive 1908 Tunguska meteorite traveled directly over Lake Baikal. There are enough other sightings over it that two new unmanned tracking stations are located nearby. Are meteorites somehow attracted to Lake Baikal? Why does the Russian military also conduct missile launches directly over the same area? Are they still looking for the UFO that caused a Russian plane to crash into the lake while chasing it in 1958? Or sending warnings to the underwater aliens seen by divers in 1982?

Why cause all of this confusion if it’s just a meteorite.