Have the cola wars gone galactic? Here’s a story that may support the argument and give one company some photos for its next ad campaign. A traffic accident in Monclava, Coahuila, Mexico, involving an overturned Coca Cola delivery truck took a strange new turn when photographs taken after the incident showed a UFO appearing to observe the truck. Before you shake your head, note that Monclava is the home of a man who built a pyramid per instructions from an alien and has had its share of other ET sightings. Is there something more than cold cola attracting aliens to Monclava?

The news report is in Spanish and suffers from poor Google translation, but here’s what can be determined. The incident took place on October 21 at about 5 pm. After the Coca Cola delivery truck inexplicably flipped over on Highway 53 heading towards Backbone, Nuevo Leon, the driver called for assistance. Another truck showed up and several motorists also stopped to help.

The reporting witness (it’s not clear if it was the truck’s driver) said there were “12 companions” in all at the scene and many took photographs of the accident. It wasn’t until later that the witness noticed the UFO in his photographs. He claims to have checked with his “12 companions” and all of the photos taken show one or possibly more “alleged UFOs.”

Before you yell “drone,” the witness also remembers something unusual that occurred during the cleanup.

Another strange fact is that we wanted to put the music but never worked the stereo, then, to get to our homes was still running smoothly, something happened, but we did not realize until now that we saw the pictures.

Did the UFO cause an electronic blackout? Were their phones and other devices affected? Sorry, that’s all they wrote, except for a note that “although people who were part decided to remain anonymous considered important to share the fact with the media.”

Do extraterrestrials like Coke, Pepsi or just Monclava. Earlier this year, we heard about Raymundo Corona, a farmer in Monclava who claimed he received “orders” to build a 22-foot-tall pyramid from a tall alien named Herulayka who said he was from the planet Nefilin in the Orion constellation. There was no word on Herulayka’s soft drink preference.

In 2010, two Monclova children reported seeing “an alleged monster with humanoid characteristics” later described as “a little man with smooth, grey skin and four legs or lower extremities.” Additional witnesses eventually came forth, along with a farmer who claimed he lost ten goats and said the alien was a – you guessed it – Chupacabra.

Is Monclava an alien hotspot? Was the Coke truck flipped because aliens like Coca Cola or were they expressing their preference for Pepsi? Has anyone checked the vending machines? 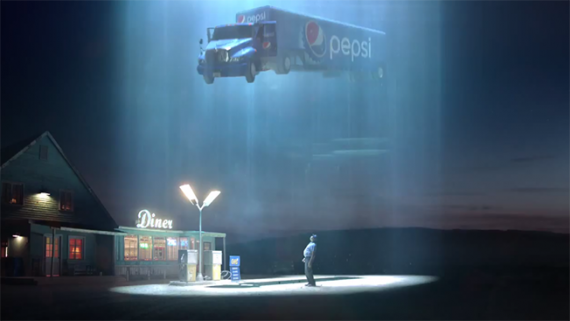