The end of World War I was a little more than six months away when one of the strangest enemy naval ship captures of that or any war occurred in the Irish Sea off the coast of Scotland. The British patrol ship Coreopsis found the German submarine UB-85 disabled and floating on the surface in broad daylight. The shocking encounter was followed by the more shocking surrender without a fight by the German crew. The terrified captain of the UB-85 told his counterpart on the Coreopsis that capture was a better fate than once more meeting the sea monster that wrecked his U-boat. 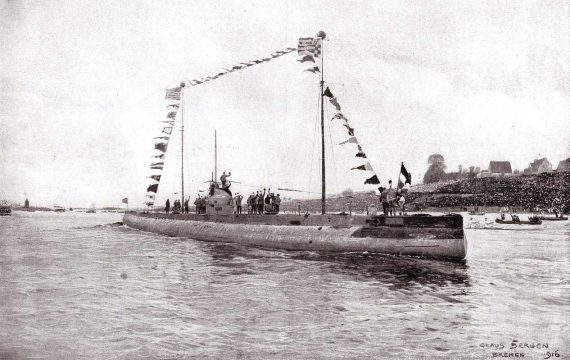 Captain Gunther Krech admitted freely and without coercion this wild story. He claimed the submarine surfaced the night before to charge its batteries when a sea monster climbed out of the water onto the boat, causing it to list to the starboard side. The captain said he and crew members on the deck were joined by other sailors in fighting off the monster, but not before it damaged the deck, rending the boat incapable of submerging. The story was corroborated by other UB-85 crew members. Not being able to use the sub, the Coreopsis sank the U-Boat. While the official ship’s log did not report the sea monster, the tale has been told for nearly a century while the only remaining witness – the UB-85 itself - remained lost on the floor of the Irish Sea … until now.

While surveying the area prior to laying a subsea power cable, a crew from SP Energy Networks captured sonar images of what appears to be the UB-85 in the North Channel off the coast of Stranraer in southwest Scotland. Only two UBIII-Class submarines were reported lost in this area — the UB-85 and its sister boat UB-82.

The archaeology of the site, namely some late-war features such as the larger deck cannon, is the strongest evidence pointing to the UB-85. 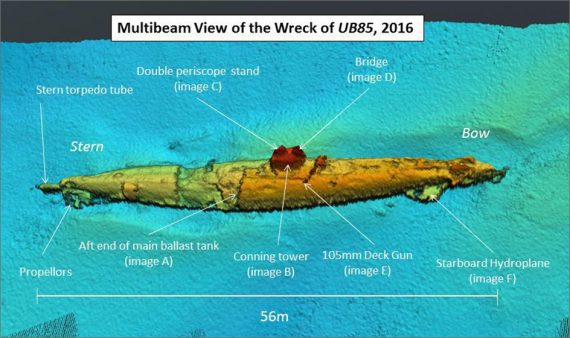 Bournemouth University nautical archeologist and historian Innes McCartney made the determination after seeing the detailed sonar images. They show the 147-foot (45 m) wreck to be in good shape except for debris coming out of the stern. Could that be damage caused by the sea monster?

I don't think it was a sea monster. You've got to remember that after the war the records were sealed, but there were all these people with some connection to British intelligence who yearned to boast of mighty deeds at sea but couldn't tell the true stories.

McCartney thinks the unbelievable story was a cover for human error, possibly when the captain saw the British patrol boat approaching and ordered a crash dive which was aborted when a crew member didn’t fasten down the top hatch correctly, causing the damage that forced them to surface. He’s hoping that more images and possibly a dive will confirm his theory.

Or will it confirm the alternate theory put forth by Gary Campbell, keeper of the Official Sightings Register of the Loch Ness Monster. He thinks it was one of the many monsters seen in the area.

History has shown that there have been consistent reports of large 'monsters' not just in lakes and lochs like Loch Ness but out in open waters as well.

Which one will it be?