Any list of the most recognized statues in the world will have Auguste Rodin’s The Thinker at or near the top. The muscular nude man with furled brown and chin on hand is the go-to symbol for deep thought. However, he’s only been thinking since 1904 when the first bronze casting of the statue first went on display. Rodin said his creation was thinking about Hell. Now, another smaller and more mysterious 3,800-year-old thinker statue has been found in Israel. What’s HE thinking about?

One can see that the face of the figure seems to be resting on its hand as if in a state of reflection. 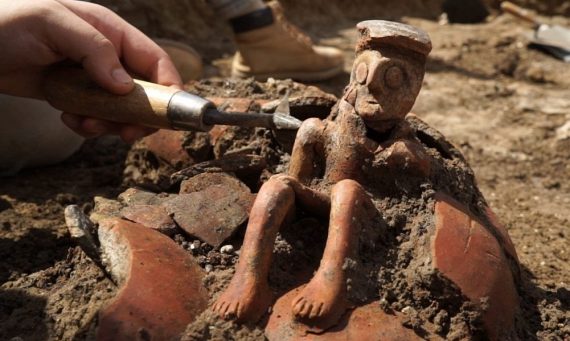 The tiny thinking man with chin in hand was discovered recently in the Tel Aviv suburb of Yehud at an excavation site under the direction of Gilad Itach. The 18 cm (7 in) statue is part of a jug and appears to have been added to the neck of the jug after the vessel had been completed. The jug-and-thinker were found with daggers, arrowheads and donkey and sheep bones that Itach believes are funeral offerings buried with an important person 3,800 years ago in the Middle Bronze Age.

To the best of my knowledge such a rich funerary assemblage that also includes such a unique pottery vessel has never before been discovered in the country. 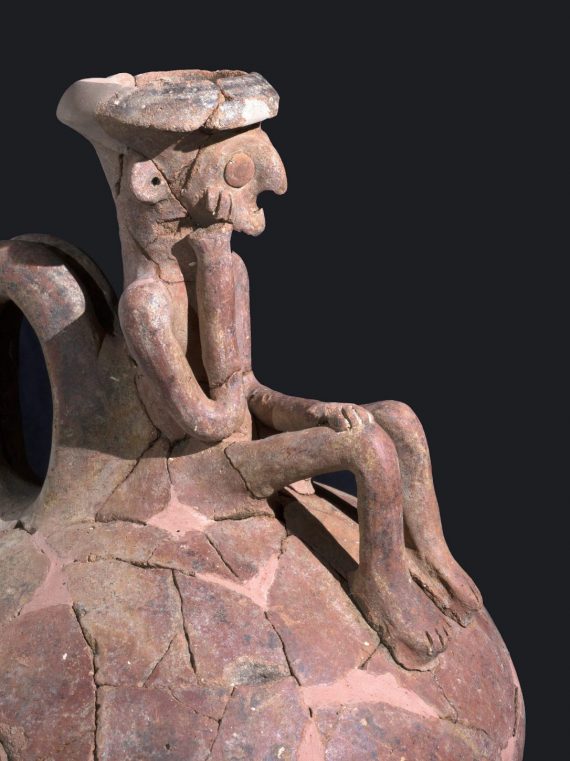 What is this 3,800-year-old thinker thinking about? What wine will the jug be filled with to go with sheep? (The donkey bones were probably there for afterlife transportation). The Middle Bronze Age is often called the “Biblical period” since it’s when many of the major events of the Hebrew bible and Old Testament took place, so perhaps he’s thinking about what impact those events might have on the world.

Rodin’s The Thinker is also in a sense related to the Bible. It was originally commissioned to be part of a collection of statues based on Dante’s The Divine Comedy. The statue was originally called the Poet and believed to depict Dante contemplating the Gates of Hell. After Rodin decided to make the statue a stand-alone model, it was renamed The Thinker by foundry workers casting it. While not as small as its Israeli counterpart, Rodin’s began as a 3-foot statue before he cast the 6-foot model that propelled him to fame.

It’s unlikely that we’ll find out who created the tiny thinker found in Israel. However, he’s unusual enough that he can potentially be copied as much as Rodin’s. Look for Little Thinkers on T-shirts and coffee mugs soon.