For those of you who need to look at something to get the memory of the election out of your brain, this may be the answer. A diver swimming along the seabed near Bali (lucky guy) captured on video a 13-legged green creature with a balloon-like transparent head filled with teeth that appears to be able to inflate to three times its normal size. Has Bali started storing nuclear waste? Do aliens like diving there as much as humans?

Whatever this balloon-head creature is, it’s obviously intelligent since it’s living in Bali and not Siberia or Alaska like a couple of other recently discovered bizarre creatures. Before you dismiss it as some escaped aquarium fish, remember that this was found in Bali, home of a number of strange underwater cryptids and mythological creatures and even stranger ones on land.

One famous Bali creature is the Naga, a crowned serpent or dragon sometimes depicted with wings. It’s linked religiously to the earth and water and is considered to be one of the many guardians of the underworld. Balloon-head doesn’t look like a serpent, so that eliminates Naga and also Antaboga, another Shiva-Hindu serpent whose name means “endless wealth,” making it a friendly beast.

Perhaps the balloon-head is a form of the Batara Kala, a Balinese god of the underworld who devours unlucky people and causes eclipses by eating the sun and the moon. One myth claims Batara Kala was conceived when a drop of Shiva’s semen was swallowed by a fish. That would put Batara Kala under water but he’s better known to live in caves.

Things get scarier on land in Bali. That’s where you might find Rangda, the demon child-eating queen of an army of witches called the Leyak. “Witches” may be too nice of a description as the Leyaks are often depicted as a flying head with its entrails dangling in the wind as it looks for pregnant woman so it can suck the blood of their unborn babies.

Forget about the election yet? Why do people who live in such a beautiful part of the world have such monstrous myths? 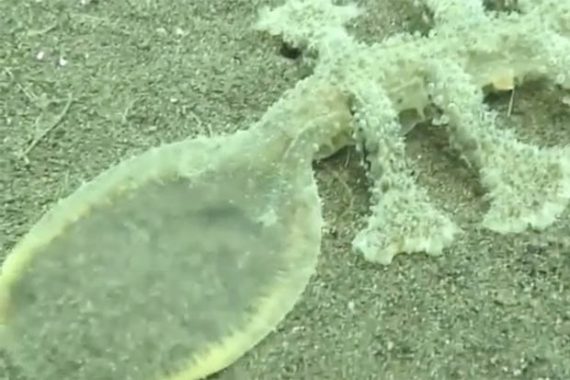 The Leyaks make Balloon-head seem almost tame, even with 13 legs. And, in fact, it is. Balloon-head is actually a carnivorous sea slug is called a melibe leonine (lion’s mane sea slug) or a hooded nudibranch. The hood or balloon-head is a mouth that expands to become a net for catching small crustaceans, mollusks, jellyfish other Balinese sea creatures. Fortunately, it’s too small to eat divers and other humans. However, it's native to the North American west coast from Alaska to Baja California, so it's still a mystery how it got to Bali.