Chupacabra in a Cage? No!

On one particular morning in late 2004, I received a phone call from an elderly man who had seen the SyFy Channel's show - "Proof Positive" - on my quest to solve the riddle of the Puerto Rican chupacabra. The man in question wanted to do more than just have a casual chat, however: he claimed to have a chupacabra in his backyard. Yes, you did read that right. Well, that's certainly not the kind of thing you hear every day! The caller was a resident of Grapevine, Texas, which is only about a forty minute drive from where I lived at the time. You won't be surprised to know that I offered to come and take a careful and close look at the body – as in right now.

The man quickly corrected me on my words, with a reply that went something like this: "No, it's not a body. It's not dead. It's in a trap. It's alive." This, to be sure, was a major development. As I work from home, it was not a problem to check out the deadly monster for myself. I told the man I could be there within the hour. That would work, he replied. It was time to finally confront, face to face, what was rapidly becoming my very own, monstrous, nemesis. 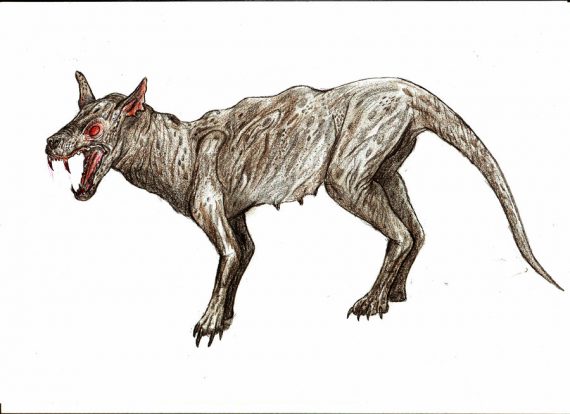 Ten minutes before I arrived, I called the guy on my cell to let him know I was almost there. As a result, when I pulled up he was already on the front yard, pacing around. I got out of the car and a creature suddenly charged me. No, it wasn't a chupacabra: it was a small dachshund, not at all happy to see his personal territory invaded by a stranger with an even stranger, non-Texan accent. The white-haired man, Ray, called his dog off my ankle. We shook hands and walked inside Ray's home. I was offered a very welcome, tall glass of iced lemonade and we cut straight to the chase.

It's important that, first, I tell you a little bit about the location. Although Ray's home was built on a regular, suburban street, it backed onto a stretch of woodland that, while not large, was certainly densely packed. As we sat in the living room Ray told me that, for several nights previously, his little dog, Fuzz, had constantly wanted outside. In fact, Fuzz had practically tried to scratch the backdoor down. Aware that something wild was likely out there, lurking in the shadows, Ray scooped up Fuzz in his hands and took a few, tentative steps outside. He saw nothing, but he did hear a furious scuffle, somewhere near the line of the fence. So did Fuzz.

Late on the next night, Ray caught sight of a pale-looking animal that was not overly large, but that clearly reacted to his and the dog's presence on the back porch. That's to say it shot off into the darkness and quickly vanished. Ray was determined to figure out what the beast was, and borrowed from a hunter friend a steel trap-style cage, one with a pressure activated, drop-down door. Late on the following afternoon, Ray placed various, sundry items of food – and a bowl of water - in the trap. He positioned it near the fence, which was overlooked by the woods. And then he waited, patiently but excitedly. Although he heard nothing untoward that night, when he went out to check on the trap the next morning, Ray got the absolute shock of his life: a bizarre creature was sitting in the cage, staring right at him. Skinny, hairless and with penetrating eyes, it made for a profoundly eerie sight. 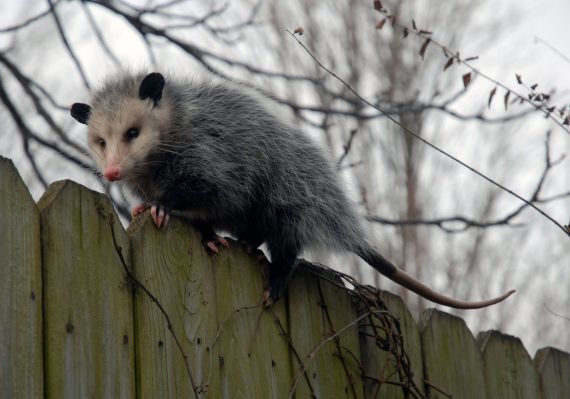 At that point in the conversation, Ray asked me if I wanted to see it. Of course, I did! We walked to the backdoor, as did Fuzz. I was about to confront a real life chupacabra. Sure enough, there was the creature, watching us carefully as we approached it. Its body was largely hairless. Its head was long and pointed. Its ears were prominent. It had a fierce and determined look on its face. It was, unfortunately, a possum with a very bad case of mange. When I told Ray what he had really caught, he replied, very defensively: "No, it's a chupacabra."

"No, it's a possum with mange," I repeated, firmly.

"No...it's...a...possum," I said, again, this time slowly and deliberately. Even though there was nothing remotely odd about the animal – aside from its hairless condition, which, admittedly, did make it look very weird – I asked Ray if I could take a photo of it. He hemmed and hawed and finally said "no." Not at all impressed by my down to earth explanation, he said he was going to contact one of the local television news stations and sell his own photos for a fistful of dollars.

I assured Ray that when the TV people brought in a wildlife expert – as they most surely would – the identity of the creature would be confirmed, very quickly, and no-one would be interested in the photos, in the slightest. He, again, assured me it was a chupacabra, so yes: they would be interested; very interested. We were doing nothing but going around in circles. We shook hands, and I went on my way. Since Ray's story – and the attendant photos – never made it to the news, I figured that, just like me, Dallas' media wasn't buying into the chupacabra angle either.

Even though the animal Ray had snared was clearly not a chupacabra, the affair was still of great importance. Here's why: it demonstrated to me that such was the then-growing attraction of the chupacabra legend, just about any unusual-looking animal could be offered up as the legendary sucker of goats. And was being offered up! As the years progressed, I found myself in more than a few, very similar situations. Each and every case had one thing in common: they taught me to be very cautious of any and all claims of captured, killed, or caged chupacabra.