Dead Aliens and the “Fear of God”

In the last weekend of October, I spoke at the Night Siege conference in Greensboro, North Carolina. It was a well-attended event and a good time was had by all. As so often happens at gigs such as this one, more than a few people came up to me to share their stories of the UFO kind. One came from a man who I estimated was in his late fifties or early sixties and who claimed something very controversial in relation to UFOs.

I listened carefully to what he had to say, which basically went like this: he spent much of 1987 and the early part of 1988 stationed at Wright-Patterson Air Force Base, Dayton, Ohio. His specialty was photography and photo-analysis. He claimed that in June 1987 - under circumstances which he declined to fully reveal - he had the opportunity to view a number of photographs that had then recently been taken at a farm in Kentucky. Or, rather, over the farm. 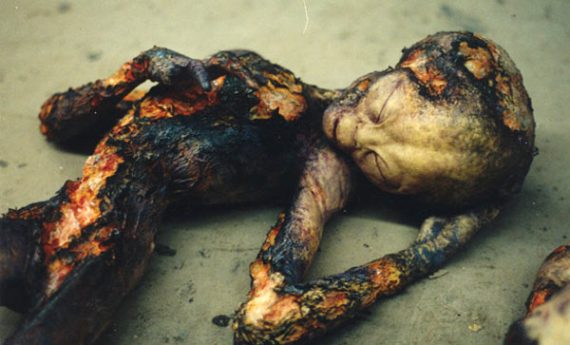 They were taken during daylight by the crew of a military helicopter that was hovering at a low level over one specific part of the farm. The team had, apparently, been brought in to take overhead photos of something very strange: (A) the rotted corpses of two, strange, humanoid creatures and (B) a flattened, circular area of ground around 10-feet in diameter. The helicopter hovered as the photo-team carefully captured the scene - immediately after which the team exited the area. A clean-up crew then moved in and later left with what remained of the bodies of the two beings, and sealed containers of soil collected from where the circle was found. The man didn't say much more than that, but I'm pretty sure he could've.

When I heard the story, it vaguely struck a chord. It was only today, however, that I realized why it seemed somewhat familiar. After digging around for a while, I found a short reference to what was clearly the same story in Leonard Stringfield's 1989, 22-page paper titled UFO Crash/Retrievals: Is the Cover-Up Lifting? It is a short story that is also summarized in Ryan Wood's book, Majic Eyes Only. Ryan says the following of the case:

"Briefly described by researcher Leonard Stringfield, this case concerns the discovery on ranch land in Western Kentucky in March 1987 of the skeletal remains of 'two humanoid entities' and a 'burned-out circle, about 4 ft. in diameter, in an open grassy field.' The property was reportedly owned by a retired medical doctor, a friend of Cincinnati radio host Bill Boshears, who arranged for Stringfield to speak directly with the source. According to the doctor, the bodies had large skulls, cat-like jaws, a 'barrel-like' rib cage, and long arms equipped with three fingers. The doctor quickly contacted local law enforcement personnel and was blessed the following day with a visit from the Air Force. A colonel informed the doctor that he was there to clean up the area and remove the skeletal remains for official examination. The doctor himself was taken to an unnamed military base for interrogation, where he was shown 'photos of other alien corpses' and had the 'fear of god' put in him by the military. Although the doctor reportedly expressed interest in Stringfield's research and agreed to stay in touch, Stringfield did not hear from him again."

The story that was self-published by Leonard Stringfield in 1989 - and by Ryan Wood in his 2005 book - sounds very much like the account given to me at the Night Siege gig (the discrepancies in the size of the circular patch of ground aside). Of course, those of a skeptical nature might very well say that the guy who came up to me at the Night Siege event got the story from either Stringfield's report or Wood's book. Maybe that is exactly what happened. On the other hand, however, perhaps we're dealing with genuine sources and different perspectives on one and the same event. I intend to pursue this further and, should anything of significance surface (pro or con), I'll post it here at Mysterious Universe.

The Nightmare of Walking Corpse Syndrome