Texas is the second largest state in the U.S. It’s big. Really big. Texas’ one-time tourism slogan, “Texas – It’s Like A Whole Other Country,” is apt. At 268,580 square miles, the state is slightly bigger (and more polite) than the entire country of France. It boasts four city areas (Dallas-Fort Worth counts as one) that rank in the top ten most populous cities in America. There are still cowboys in Texas, as well as oilmen, and for some reason hipsters. Texas calls itself the Lone Star State to celebrate the fact that it was once an independent republic even though it’s also been under the flags of Spain, France, Mexico, the American Confederacy, and the United States. Famous people from Texas include actress Carole Burnett, U.S. President Lyndon B. Johnson, jockey Willie Shoemaker, Major League Baseball Hall of Fame pitcher Nolan Ryan, aviation mogul Howard Hughes, singers Roy Orbison, Willie Nelson, and Buddy Holly, Conan the Barbarian author Robert E. Howard, and “Star Trek” creator Gene Roddenberry. The landscape of Texas is as vast as its size. There are deserts, swamps, grasslands, piny woods, hills, prairies, forests, beaches, mountains, and plenty of room for monsters to go a-roamin’.

The Lake Worth Monster

The area around Lake Worth, a 3,489-acre reservoir in Fort Worth, Texas, is home to a half-man/half-goat creature called the Lake Worth Monster. Variations of an urban legend set in the 1930s have either Klansmen or drunken rednecks crossing a bridge that connects the cities of Lewisville and Alton, and lynching a black farmer known by the locals as the Goatman. Although they hanged the man over the bridge, when they pulled up the rope, the man was no longer attached. Although the bridge is no longer open to vehicle traffic, legends persist that crossing the bridge at night will bring the wrath of the Goatman.

Then, decades later, people started to see a goat-like biped in the area, and the legend of the Goatman came to life.

In July 1969, couples making out in their cars parked near the bridge encountered a creature that walked like a man, but looked like a satyr from Greek mythology. After reporting this sighting to the police, another local man claimed a half-man/half-goat jumped onto his car from a tree leaving an 18-inch scratch in the paint. Although police couldn’t say the Goatman caused the scratch, the damage was indeed there.

The last sighting from that year involved ten people gathered near the lake one October night when the Goatman appeared atop a bluff and threw an old tire at them. A man named Allen Plaster took a Polaroid photograph of the event.

Although 1969 was an active time for Goatman sightings, encounters have slowed to a trickle, and the Lake Worth Monster has receded back into the shadows of legend. 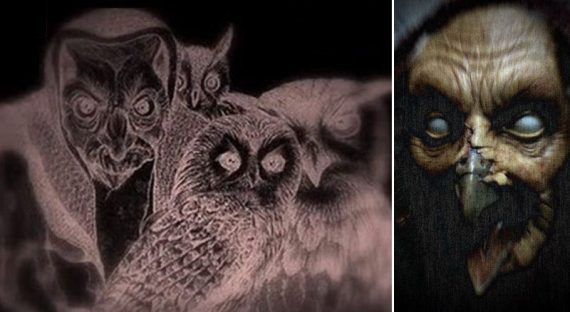 Tales of tragedies changing humans into something less than human abound in Texas, like the story of La Lechuza from El Paso. La Lechuza means “the owl” in Spanish, but in local stories it means the Owl Witch.

As legend has it, after locals discovered a woman practicing dark magic, they put her to death. However, her magic was strong, and the woman came back to life. During the day she appears as a woman dressed in black, but at night she assumes the form of a human-sized owl with the woman’s face.

The Owl Witch spends the night searching for prey, sometimes luring unsuspecting people into the dark by whistling, or wailing like a baby. When the person goes to investigate the sound, she snatches them, and carries them to their death.

Although fanciful, stories abound of people seeing giant black birds at night that follow them home, only to wake to find scratches around their windows the next morning. In one story, people suspected their neighbor, an old woman, of being a witch. One night when an enormous black bird threatened neighborhood children, a man took out his rifle and shot it. Although the neighbors kept close watch on the old woman’s house, she didn’t appear for days. When she finally did, she walked with a pronounced limp. 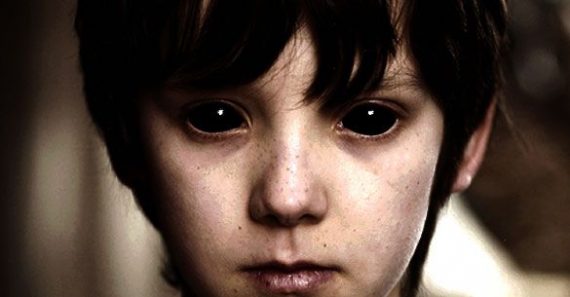 The term “black-eyed kids” hit popular culture on 16 January 1998 when journalist Brian Bethel posted his encounter with children whose eyes were black, with no iris or white.

Bethel sat in his car across from a movie theatre in Abilene, Texas, at 9.45 p.m. when he heard a tap on his window. Two boys between the ages of 10 and 14 stood outside, staring at him. “An overwhelming sense of fear and unearthliness rushed in,” Bethel wrote in his post.

The boys insisted Bethel drive them home. “Let us in,” one said. “We can’t get in your car until you do, you know. Just let us in.” As Bethel began to open the door, he saw the boys’ pure black eyes. “Just two staring orbs,” he wrote. Bethel jerked away from the door, and drove quickly out of the parking lot. When he looked behind him, the sidewalk was empty – the boys were gone.

More than a decade and a half later, Bethel still doesn’t know what he encountered. “I honestly wish I could explain this away,” Bethel said. “I’ve tried to come up with any number of scenarios, from my eyes being temporarily dilated from the brightness of the theatre marquee to me just plain not seeing things properly. Most of the time, I try to just push this particular event back into my subconscious, but it is always there.”

In the early months of the year in 1976, people from along the Rio Grande Valley up to nearby San Antonio claim to have seen a bird as large as a man flying through the Texas sky. The first reports were from policemen in Harlingen, Texas, who saw a bird with a wingspan wider than their patrol cars flying over the road. This story was quickly followed by a more terrifying one. Two teenagers, Jackie Davies, and Tracy Lawson, were playing in the Lawson’s backyard when they noticed a five-foot-tall bird with the face of a gorilla standing in a nearby irrigation canal staring at them. Lawson’s parents later found enormous three-toed bird tracks on the banks of the canal.

Stories from that year continued. Something large slammed into the wall of Brownsville resident Alverco Guajardo’s trailer. When he ran outside with a knife, he found himself face-to-face with a man-sized bird. Another Brownsville resident saw Big Bird, but claimed it had a bald head, and red glowing eyes. He told The Brownsville Herald at the time, “I was scared. It’s got wings like a bird, but it’s not a bird. That animal is not of this world.” San Benito policeman Arturo Padilla saw a five-foot-tall bird with a twelve-foot wingspan that matched that description in the headlights of his police car.

The sightings continued when a man in Raymondville heard a strange noise outside his home, and walked outside to investigate, only to be attacked by an enormous bird with a bald head. The creature grabbed his shoulders, and tried to lift him off the ground, but the man squirmed free, and fell to the ground. Neighbors came to investigate the screams, and found him on the ground trembling, his shirt ripped.

The sightings stopped soon after. 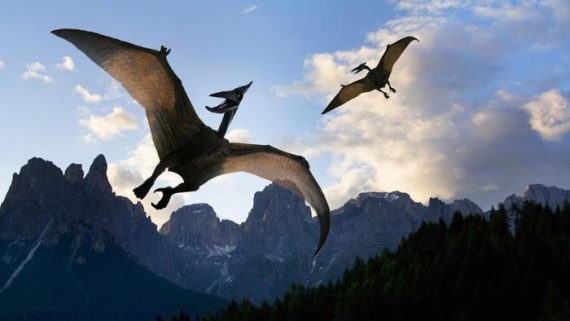 More than just bald, gorilla-faced giant birds flew in the Texas skies in 1976. That February, three San Antonio elementary school teachers were terrorized by a creature with a wingspan of between fifteen and twenty feet that swooped over their car. The creature seemed to glide rather than fly on enormous bat-like wings. The teachers all described the creature as a pterodactyl, and teachers should know what a pterodactyl looks like, even though they also should know these flying dinosaurs died out more than 65 million years ago.

The teachers weren’t alone. In September 1982 near Los Fresnos, Texas, on State Highway 100, James Thompson stopped his vehicle and watched what looked like a black featherless bird flying low. The creature, with a wingspan of about six feet, had a hump on its head, and its skin was leathery. When Thompson researched the creature he’d seen, he was stunned to see it had been a pterodactyl. 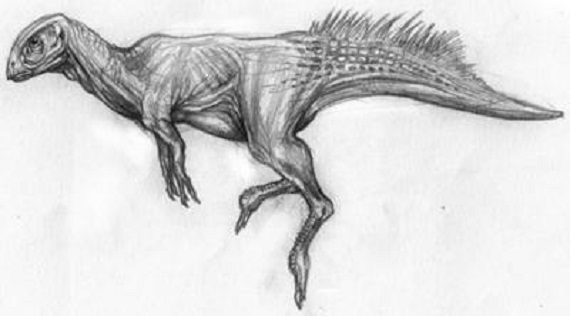 On the subject of living dinosaurs, from Big Bend National Park in southwest Texas come stories of a five-foot-tall greenish/brown lizard that runs on two legs. Called the Mountain Boomer because it produces a bark like “distant thunder,” this monster, described as a theropod dinosaur, lives in remote mountainous regions. However, a smaller local lizard that didn’t die out in the Cretaceous Period, fits the same description, although it’s not five feet tall.

Mountain Boomer is a term used for the Eastern Collared Lizard, a fourteen-inch lizard that can run on two legs, and looks like a tiny dinosaur. It’s the state lizard of nearby Oklahoma.

Although the Mountain Boomer grows to just more than a foot tall, this hasn’t stopped people from reportedly seeing ones that are the size of a man. In the 1970s, a Texan in the Big Bend area reported his car had been run off the road by a theropod dinosaur, and in the early 1990s, a person claimed to encounter a similar dinosaur eating road kill, but when the car approached, the dinosaur ran off.

UFO researcher Jimmy Ward wrote about the Mountain Boomer in an article by the same name. He interviewed a Connecticut family traveling through Texas that saw an enormous lizard with heavy back legs, and small front legs that looked like it came from the movie “Jurassic Park.” 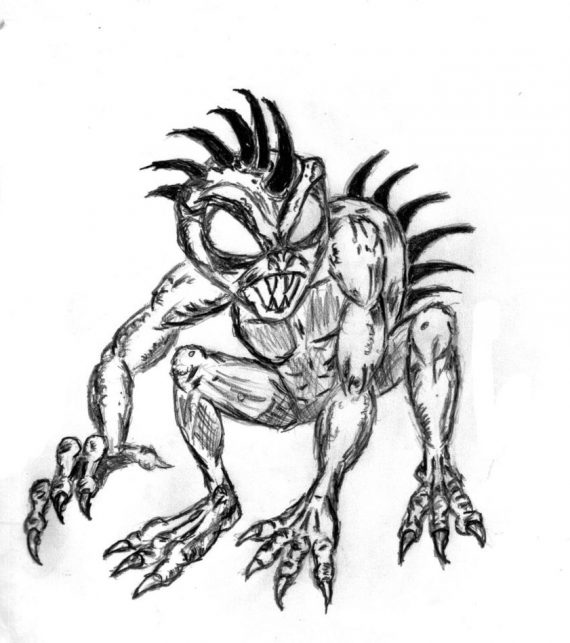 A list of Texas monsters wouldn’t be complete without the chupacabra. The legendary goatsucker (that’s what the name means) was first seen in Puerto Rico in the 1990s, and has spread into Mexico, and the American Southwest. This hairless beast has needle-like fangs, large red eyes, a row of spines down its back, and is occasionally reported to have bat-like wings. The creature gets its name from the association between sightings, and the death of small livestock that are drained of blood.

A myriad of reports have surface over the years of people capturing a chupacabra on their property (a number of those reports from Texas). After DNA tests these creatures turn out to be mangy dogs, coyotes, or raccoons. 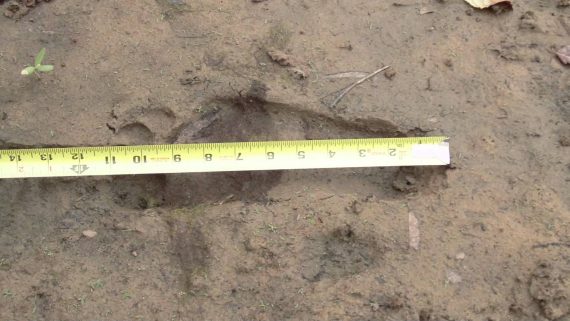 Tales of Bigfoot have graced almost every state in this series, so the big furry fellow only gets a cursory mention here. Although popular entertainment depicts the landscape of Texas to be far removed from the stereotypical Sasquatch haunts of the Pacific Northwest, it’s not. East Texas is covered by thick pine forests, and is a hotbed of Bigfoot sightings. Although East Texas has by far the most Bigfoot encounter reports in the state, sightings dot the entire map.

One place in Texas people always see Bigfoot is the unincorporated community of Bigfoot southwest of San Antonio, population 450.

Christmas Reading of the Undead Kind