Getting into the Witness Protection Program is one relatively sure way to hide your true identity, but the price of admission is pretty high and often dangerous. Hiding your identity is even tougher now that facial recognition software is becoming common (thanks, Facebook!), surveillance is becoming universal and the FBI and other organizations are building databases of faces. Fortunately, there’s a simple way to fool Big Face Brother and it only costs 22 cents. The secret is wearing goofy (not Google) glasses. Wait, what?

Accessorize to a Crime: Real and Stealthy Attacks on State-of-the-Art Face Recognition, a paper presented at the 2016 Computer and Communications Security conference held in late October in Vienna, Austria, describes how a team of researchers at Carnegie Mellon University in Pittsburgh developed unfashionable eyeglass frames that can hide a person’s face from facial recognition software and even trick it into seeing a celebrity’s face on your body.

The secret is in pixel patterns. The deep learning systems in facial recognition programs aren’t really that deep when it comes to faces. They reduce images down to pixels and then look for patterns as subtle as nostril size, distance between eyebrows or dimple depth. To another human, those things have meaning … to a software program, they’re just abstract patterns.

That’s where the trickery starts. The Carnegie Mellon team picked out specific facial patterns and printed them on the front of wide-rimmed eyeglass frames (printed on an ordinary printer at a cost of 22 cents) that cover 6.5 percent of a face – enough to fool the system. The patterns look wild and somewhat psychedelic to humans of a certain age but to the software, they’re facial features. The results of the test were perfect – the glasses blinded the facial recognition software 100 percent of the time.

For those hoping to get mistaken for Beyonce or Jay Z, results were mixed (especially if the camera moved from your face to your tush), although the tests seemed a little extreme. A man wearing the glasses was able to pass as actress Milla Jovovich 87.87 percent of the time but a female Asian trying to pass as Colin Powell was unmasked (unglassed?) 84 out of 100 times.

Will these glasses protect you from the FBI, the mob or Facebook? Yes and no. The tests were in a controlled environment with fixed lighting and camera angles. A closed-circuit security camera that picks you up running by after robbing a bank will not get enough of the software-fooling pixel patterns to mistake your identity. However, it gives us hope that we can still beat the machines some of the time.

For the rest of the time, try Groucho glasses. 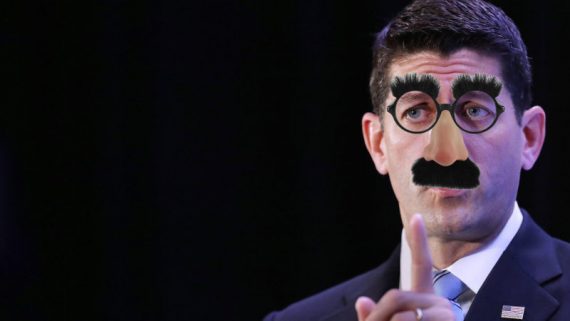