A photograph of what appears to be a semi-transparent saucer-shaped UFO over Lecco, Italy, has people talking about its possible connections to the recent earthquake activity in that country. It also has some talking about it as a ship possibly belonging to Pleiadians or Nordic Aliens. Is it either, a strange cloud, something else or just another Photoshop fantasy?

The photograph is attributed to Guiseppe Filipponi and was said to have been taken on November 2nd over Lecco, a small (pop. 48,000) city in northern Italy. The time appears to be evening before sunset and there are clouds in the sky but none resembling the translucent UFO. On November 2nd, Italy was still reeling from major earthquakes between the Marche and Umbria regions on October 30th, the largest having a magnitude of 6.5 and causing heavy damage and a number of deaths. 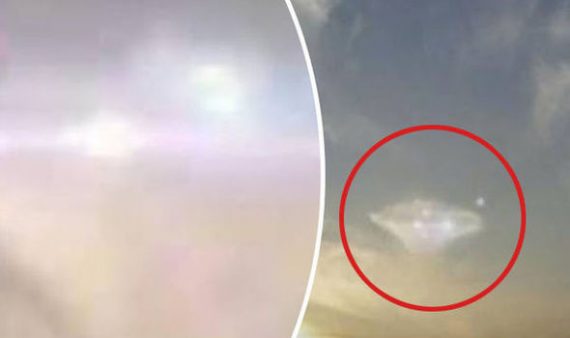 While UFOs have been seen above earthquake areas (the 2015 quake in Nepal, for example), this one was in northern Italy while the recent quakes were in central Italy. Also, the UFO was seen days after the major quake and months after the 250 or so quakes that have shaken the country since August, so theories that it may have caused the earthquakes are questionable.

Could this be an alien craft surveying the aftermath of the quakes? That seems to be where the Pleiadian connection comes in. The Pleiadians are said to have traveled from the Pleiades star cluster and are tall humanoids closely resembling Nordic-Scandinavians. They’re said to be benevolent and concerned about the welfare of humans, especially when it comes to the environment. That would explain their interest in the Italian earthquakes, but not in their appearance so far away from the epicenter – unless they were attempting to warn this area of future activity. If that’s the case, neither Guiseppe Filipponi nor anyone else reported any telepathic (their preferred means of communication) warnings.

Another connection to the Pleiadians may be the shape of the UFO.  Pleiadians are said to travel in classic saucer-shaped crafts and the Italian UFO seemed to fit that shape – although it didn’t look too solid. The usual explanation for that is “cloaking” and that might make sense if they were attacking rather than rescuing, warning or performing other benevolent deeds.

Where does that leave us? With one photo - possibly altered - of a cloudish UFO, somewhat saucer-shaped, over a country that has experienced earthquakes in other areas and doesn’t seem to be getting relief from anyone, let alone tall blond aliens. The dots are small and the connecting lines are pretty long and squiggly. “Cloud” and “coincidence” seem to be in the lead. However, the Pleiadians got some good publicity out of it - hope they appreciate it.

Whatever the case, let’s hope the earthquakes in Italy have ended for a while.