This is what appears to be a breaking news story – albeit from alternative news sources – of sightings of clusters of UFOs over a number of cities in Turkey on the night of November 27th. Don't panic ... at least, not yet. 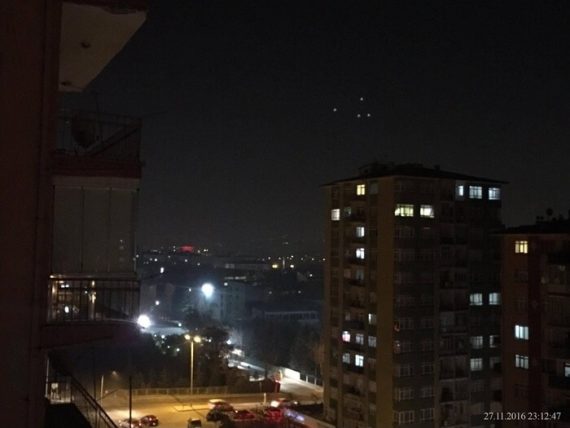 Reports of the sightings seem to have appeared first on Twitter with the hashtag #ufoattacktoturkey. Many attached photographs that seem to be from multiple vantage points and possibly multiple cities. The photographs generally show a cluster of four or five orbs (although some show up to twice that many) or lights, usually in the shape of a triangle or wedge. The photographs show the orbs in a cluster to be the same size, although one alleged to have been taken on the same night shows a large light orbited by smaller ones. A translation of the the voice on the video contains one of the best descriptions of the sightings.

Alright, I’m trying to zoom in to show you now. It is November 28, 2016, Sunday night. It’s around 2:20 a.m. right now. The object you’re seeing is in the skies of Esenler (Istanbul). I’m recording it right now. Many people like me have crowded here. We’ve informed the authorities and they’ve told us they’re dealing with the situation. It is a yellow object. We suspect it’s a UFO. It gives off a light and is in motion. Right now it’s stationary actually but it moves position every few minutes. Very interesting.

Some of the photographs also show what cities they were allegedly taken in and they include Esenler (a district of Istanbul), Bakırköy, Düzce, Üsküdar and others. 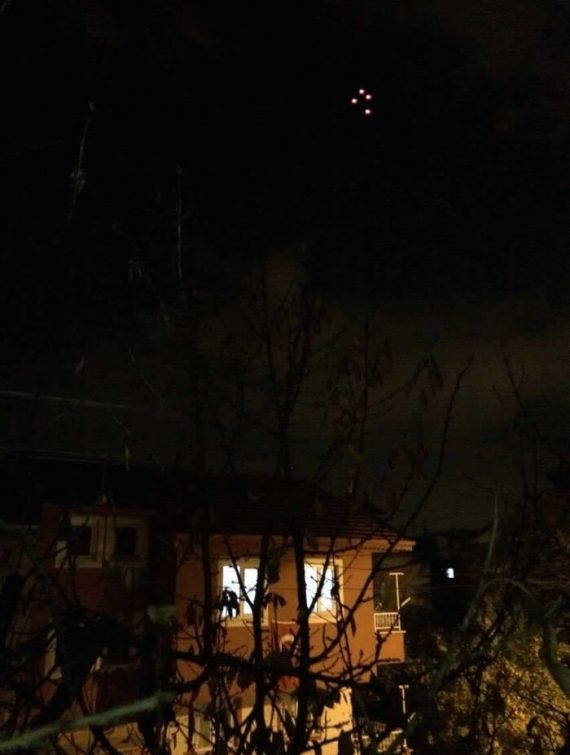 That’s about all of the details on the sightings so far. The rest of the news is about the lack of news, the alleged suppression of news (on Twitter and Reddit), the lack of response from NASA or any space agencies and numerous headlines about wars and invasions. There doesn’t appear to be anything on mainstream media sites, not even about the so-called “panic” on social media.

Are the postings being suppressed? There seem to be plenty on Twitter. Reddit has admitted to deleting posts recently as part of the so-called ‘pizzagate’ scandal, so it’s tough to determine what’s happening there. NASA rarely responds to anything involving UFOs, so it’s no surprise there’s no comment from them.

Some of the reports refer to an explosion, leading many to think it’s an invasion. However, the videos and photos showing an explosion appear to be from the coup attempt in July and only a few of the posts say anything about a boom. Also, it seems odd that there are just photos and only one video – most of the other videos just show the same photographs. With this many alleged sightings, it's odd there aren't more of both. 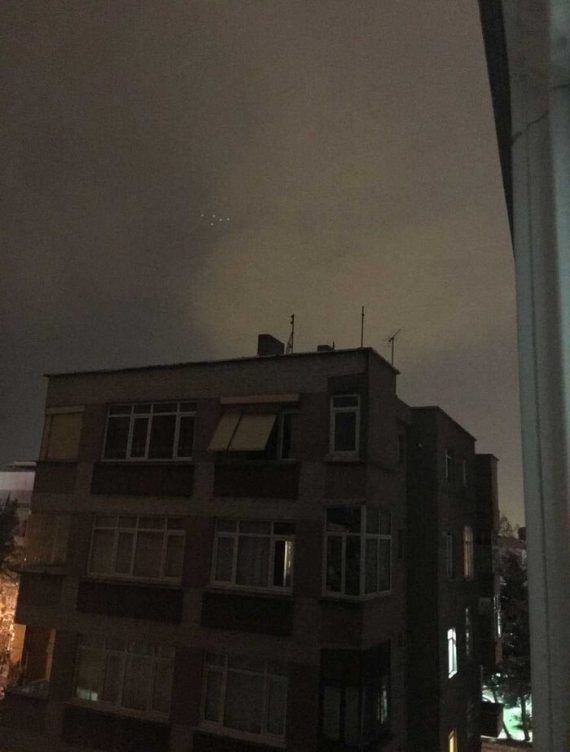 While it’s understandable that social media would explode in an uncontrolled panic like it always does, the fact (so far) is that there has been no explanation given for these sightings – real or otherwise. ‘Drones’ seems to be the leading contender, but why the seemingly simultaneous appearances in multiple locations? A promotion?

Keep watching ... both the skies and the media.