Mysterious Doomsday Plane Circles Over Denver For an Hour

When an unidentified airplane circles over a major U.S. for over an hour, it’s a cause for alarm. When the plane appears to be a military aircraft nicknamed the “Doomsday” plane, the alarm level rises. When the city is Denver, whose airport is rumored to hide mysterious underground bunkers, the alarm reaches conspiracy level. What was this doomsday plane doing over Denver?

The strange white plane showed up high over Denver on the morning of November 16th. The clear skies allowed reportedly thousands of people to watch the four-engine plane and its contrails fly in a constant oval pattern for about an hour before flying away. As calls began pouring in to police and the media, the flight was identified by the call sign IRON99 and its current and past path was able to be tracked using Flightradar24. It showed IRON99 originating on the West Coast at Travis Air Force Base and circling over Denver before leaving and landing at Tinker Air Force Base in Oklahoma.

What Flightradar24 couldn’t show was the purpose of IRON99 or even what type of plane it was. A Denver TV station reportedly contacted officials from the Federal Aviation Administration (FAA), U.S. Northern Command (NORTHCOM), U.S. Strategic Command (STRATCOM), North American Aerospace Defense Command (NORAD) and a dozen Air Force Bases and no one gave any answers.

The overall mission of the E-6B is command, control and communications abilities to direct and employ strategic resources. 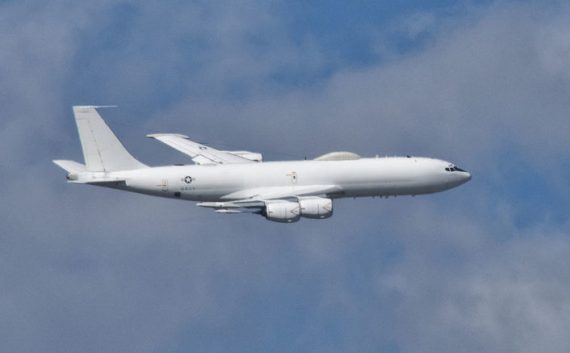 That doesn’t sound so bad … except those “strategic resources” are why it’s nicknamed the “Doomsday plane.” E-6B crews are responsible for coordinating the launches of nuclear missiles from ground bases and nuclear submarines.

What was this doomsday plane doing over Denver? That’s classified, said Lt. Hubbell. That doesn’t make anyone feel better, especially after the recent election … and especially because of the rumors surrounding Denver International Airport. Opened on February 28, 1995, a year late and $2 billion over budget, DIA was immediately enveloped in multiple conspiracy theories. The runway system looks to some as if it’s laid out in the shape of a swastika. The dedication marker mentions the “New World Airport Commission,” a non-existent and suspiciously-named organization.

Then there are the alleged underground bunkers. There are rumors that tunnels from a failed automated baggage system lead to underground tunnels which lead to bunkers or perhaps even five entire buildings that were built incorrectly and buried instead of being destroyed.

All of this is denied by airport officials … just like access to the real mission of the doomsday plane is being denied by the military.

What was it doing over Denver?

Foam Blob in Santa Clara and Bouncing Ground in Aberdeen