Mysterious Object Falls From Sky into Myanmar Jade Mine

Initially, we thought it was a battle. The explosion made our houses shake. We saw the smoke from our village. The air near the object smelled acrid.

That was one of the first eyewitness reports from the Hmaw His Zar village in the Kachin state of Myanmar on November 10th when a massive mysterious metal object fell from the sky and made a direct hit on an abandoned jade mine. Aliens looking for nice piece of jade jewelry for the tall grey missus?

Kachin State is in northern Myanmar on the border with China and is filled with jade mines, so an object falling from the sky has a very good chance of hitting one. In fact, the largest jade stone in the world – weighing 3000 tons and measuring 21 meters long, 4.8 meters wide and 10.5 meters high (69 ft. by 15.7 ft. by 34.4 ft.) was found there in 2000 in Hpakant, which the Hmaw His Zar village is part of. That one wasn't unearthed but another, weighing 210 tons, was found there and excavated just last month.

This is also where the world’s largest jade mine disaster occurred almost a year ago (November 22, 2015) when a landslide killed at least 116 people and 100 more were missing. Exact totals were never known because Hpakant is described as a wild unregulated area filled with unscrupulous mining companies and desperate poor people scrounging for tiny pieces of jade.

Was the mysterious object sent as a message to Hpakant to clean up its act?

I do not know exactly what it is, because I am not a specialist. Experts are planning to check it.

Village leader U Hla Aung called in the government for help while witness Ko Maung Myo bravely got close enough to take pictures and measurements of the mysterious cylindrical object, which he said was 37 meters (12 ft.) long and (1.5 meters (5 ft.) in diameter.

I think it was an engine because I found a diode and many copper wires at the tail of the body. It also looks like a jet engine block. 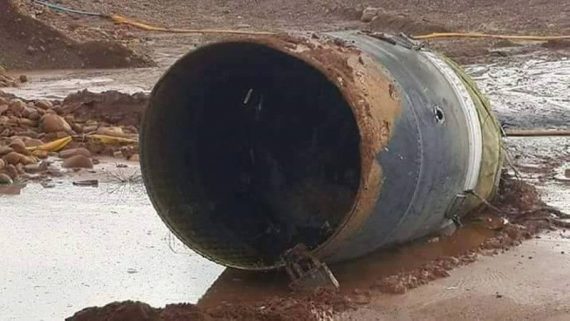 Witnesses say the object hit the ground hard and bounced 50 meters back into the air before falling again on the mine. Another smaller piece crashed through the roof of a house, but no injuries were reported from either crash.

The proximity to China – and Chinese letters on one of the pieces – gives a hint to what the objects might be, along with a report that China launched a rocket carrying a secret experimental X-ray pulsar navigation spacecraft the night before the objects fell.

How secret is it? Those “experts” sent by the government to inspect it vaguely “assumed that it was part of some aircraft or rocket” and said “The military is taking security measures and has covered the debris with tarpaulin.”

Meanwhile, terrified villagers return to working in the unsafe jade mines or scavenging for scraps. The mysterious metal object wasn't from an alien spacecraft but perhaps it can still be a warning. 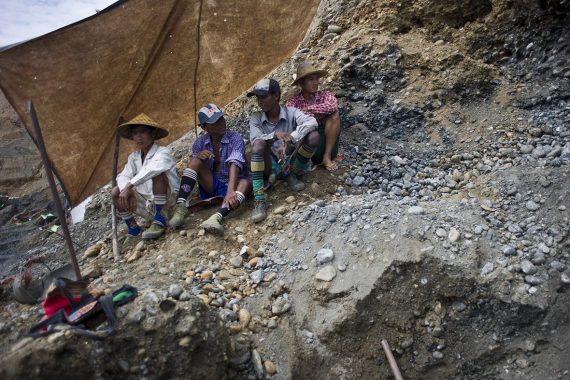