Narwhals are Using That Long Tooth For a Good Purpose

If you’ve got a sharply-pointed 9-foot-long tooth sticking out of your face and everyone you hang around with in close proximity has one too, you may want to have really good vision so no one pokes an eye out – even if they don’t drink. That could be a problem if you’re a narwhal and you live under arctic ice sheets that keep visibly at a consistent level of none. Fortunately, new research suggests that same dangerous tooth may also provide narwhals with the world’s pointiest navigation tool for finding cracks in the ice, prey and each other. 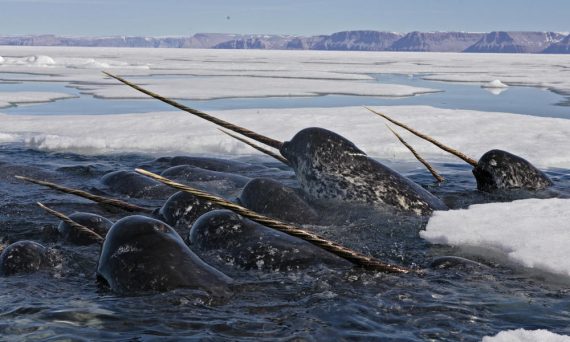 You don’t see open water for miles and miles and suddenly there’s a small crack, and you’ll see narwhals in it. I’ve always wondered how do these animals navigate under that, and how do they find these small openings to breathe?

As detailed in her study in PLOS One, University of Washington ecologist Kristin Laidre recently took a team of researchers to Baffin Bay, West Greenland, to test a new idea on the purpose of the narwhal’s (Monodon monoceros) protruding canine tooth. Previous theories on their purpose include fighting and bragging about testicle size to females (narwhal sexting - who knew?). However, the hollow tooth or tusk is also a sensory organ filled with millions of nerve endings that could pick up signals from the water and send them to the narwhal’s brain.

The researchers placed hydrophones in narwhal waters at depths between 3 and 18 meters. Sure enough, they picked up clicks being made by the creatures at a rate of 1,000 per second and at a frequency too high for humans. This was no surprise since narwhals are whales and other whales use echolocation – sending as receiving clicking sounds like radar. The big discovery was that narwhals can focus their signals like laser beams to get pinpoint directions.

The key to this ability is the narwhal’s head, which acts kind of like a glass lens to narrow the clicking beam – think how a magnifying glass narrows a sunbeam to fry ants (so I’ve heard). Once it hits an object, the echoed beam is then picked up by fatty pads in the narwhal’s lower jaws and sent to the GPS in its brain to create a map to the either find or avoid the object. Narwhals also switch the clicks on and off to avoid being detected by polar bears, Greenland sharks, walruses, orcas and now, humans. 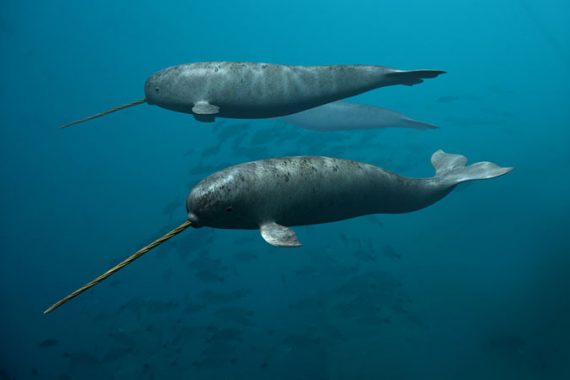 Where does the big tooth fit into this picture? Those millions of nerve endings allow it to provide fine-tuning to the narwhal’s click-based GPS, detecting movements of objects that might be prey or other narwhals and picking up scents transmitted via seawater. It all gets put together by what now looks like a pretty sophisticated narwhal brain.

The one thing the narwhal’s long tooth can’t protect it from is climate change. Regulations protect the estimated 75,000 left in arctic waters from non-Inuit illegal hunting but the creatures are still on the Near Threatened list. The extinction of a creature with such unique ability and looks would truly be a great loss.