On September 21 of this year the FBI uploaded to its website, The Vault, its eye-opening file on Nikola Tesla. The file, which can be found at this link, makes for fascinating reading. It was actually declassified more than a few years ago and, for a while, could be found at the FBI's main website. When, however, the FBI created The Vault many of its files - such as those on Marilyn Monroe, Cattle-Mutilations, Frank Sinatra, John Lennon, and Elvis Presley - were transferred (and then deleted) from the original site and posted to the new one. Some files, however, were not re-posted: they were just deleted. And that included the Tesla file. But, the good news, as I note above, is that the Tesla file is now once again available for easy download and study.

The Tesla file contains more than a few genuinely intriguing nuggets of data. In case you aren't aware of who Tesla was, there is this from Biography.com: "Inventor Nikola Tesla was born in July of 1856, in what is now Croatia. He came to the United States in 1884 and briefly worked with Thomas Edison before the two parted ways. He sold several patent rights, including those to his alternating-current machinery, to George Westinghouse. His 1891 invention, the 'Tesla coil,' is still used in radio technology today. Tesla died in New York City on January 7, 1943."

Then, there is the matter of Tesla and so-called "Death Rays." The Tesla Memorial Society of New York says: "Immediately after Tesla's death, Tesla scientific papers vanished from his hotel room in Hotel New Yorker. Tesla papers were never found. Tesla papers contained scientific data and information about 'Death Rays,' which could be used for military purposes. In 1947 the Military Intelligence service identified the writings about the particle-beam contained in Tesla's scientific papers as 'extremely important.' Military intelligence services of the USA, Germany and USSR were vitally interested in Tesla’s 'Death Rays'. The current beam-weapon program is originated from Tesla's 'Death Rays' idea." 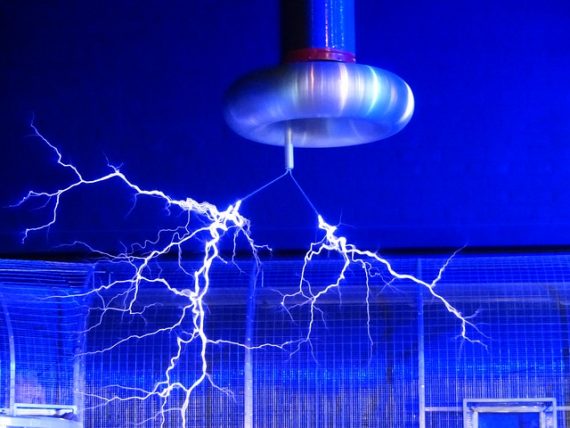 One official document in particular - which dates back to 1983, and that was declassified under the terms of the Freedom of Information Act - demonstrates a great deal of interest in Tesla's work in the area of "Death Rays." In part, this FBI document states:

"...the Soviet Union has allegedly had access to some of Tesla's papers, possibly in Belgrade and/or elsewhere, which influenced their early research into directed energy weapons, and [name deleted] feels access to much of Tesla's papers on lightning, beam weapons and/or 'death rays' would give him more insight into the Soviet beam weapons program. This is Butler's area of expertise and responsibility. He has been unable to locate any Tesla papers or copies of same in the classified or unclassified libraries at WPAFB [Wright-Patterson Air Force Base, located in Dayton, Ohio]. However, there are reports that some portions of them were shipped by the Custodian of Alien Property Office in Washington, D.C. to a technical research lab at WPAFB, possibly the 'Equipment Lab,' now closed for some years or reorganized into another organization."

The document continues: "[Deleted] and [deleted] are both desirous of learning the locations of such papers as now exist in the U.S. for both intelligence and research purposes. Therefore, [Deleted] would like to examine FBI files relating to Nikola Tesla and possibly any on Sava Kosanovic, his nephew who received the bulk of his papers after Tesla's death, and may possibly have been the subject of FBI investigation. [Deleted] travels to the Washington, D.C. area on FTD [Foreign Technology Division] business periodically and can review FBI files at FBIHQ relating to Tesla and Kosanovic."

The document concludes: "Should there be such files at FBIHQ, as well as at New York, it is requested that Bureau consider granting the above [Deleted] of FTD, official access to same, in the interest of national security."

With the FBI's file on Nikola Tesla now online at The Vault (which, by the way, is an excellent source of material), no doubt there will be further digging into official interest in the man and his "Death Ray"-themed work.