What does one find at the end of white rainbow? If you said “A wet pot of gold that you can’t see anyways because of the fog,” you’re pretty close. A photographer in Scotland captured some stunning pictures of this mysterious and rare phenomenon. Did he find anything else?

British landscape photographer Melvin Nicholson was taking pictures recently in Rannoch Moor, just south of Glen Coe and 160 km (100 miles) north of Glasgow, when he saw what he described as an “unbelievably beautiful white rainbow” or fogbow. He painted the picture as only a good landscape photographer can.

As soon as I saw this wonderful isolated windswept tree, I knew that it had to be framed by the fog bow. Freshly fallen snow set the scene all around. It was just beyond magical and one of those days that you’ll remember for a long time to come.

The first difference is in the size of the droplets. While regular rainbows are the result of rain (duh), white rainbows are caused by much smaller droplets which occur in fog or clouds. Their size prevents them from breaking the colorless sunlight into its bright components so it appears to be a white opaque band in the sky. While the shape is generally an arch, a fogbow can occur in other formations and is usually wider than a rainbow.

The best place to see a fogbow is in a fog (another duh) when the sun is bright and behind you. That’s what makes them so uncommon since fog generally happens early or late in the day and is quickly burned off by the sun. A more common spot for white rainbows is above the ocean or large bodies of water.

That’s why Melvin Nicholson’s white rainbow was so rare – it occurred on a bright day over land. While he got some beautiful photographs and Internet attention, that’s all he got as there’s no leprechaun gold or other folklore benefits to finding and chasing a white rainbow. His was just a sign that he’s a really good nature photographer. 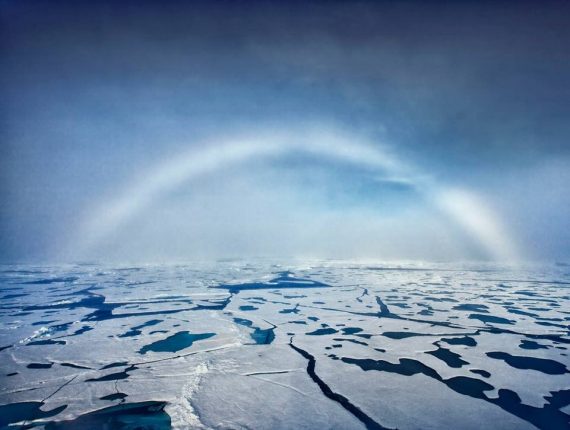