The Creepy, Colorful (and Coloring) Traditions of Christmas

“Mr. Abney was found in his chair, his hair thrown back, his face stamped with an expression of rage, fright, and mortal pain. In his left side was a terrible lacerated wound, exposing the heart. There was no blood on his hands, and a long knife that lay on the table was perfectly clean. A savage wild-cat might have inflicted the injuries. The window of the study was open, and it was the opinion of the coroner that Mr. Abney had met his death by the agency of some wild creature. But Stephen Elliott's study of the papers I have quoted led him to a very different conclusion.”

It sounds like a passage directly from some tale of the macabre, and of course, this is precisely what you’ve just read; an excerpt from “Lost Hearts”, a short story by M.R. James. Regarded as one of the literary greats of his time, James’ various works, published throughout the early years of the 20th century, juxtaposed classic elements of horror with that of modern settings, which were not only thrilling, but served as inspiration for the later works of authors that include H.P. Lovecraft.

Yet one of the most interesting facets of James’s writing had been that his stories, though dark and devilish (as one might associate with the Halloween season), were written in the spirit of a longer held tradition of ghost stories read by the fire, on Christmas Eve.

To the modern reader, celebrating Christmas Eve with readings of stories that involve hearts being cut from one’s chest would seem odd indeed.

James himself seemed a bit undecided about the literal existence of ghosts, noting once that, ”I am prepared to consider evidence and accept it if it satisfies me.” This careful skepticism, of course, never impeded his ability to tap into the more unusual traditions of Christmas, and in a most colorful and frightening way.

James and his proclivity for the Christmas ghost story of yore (or here, perhaps of “yule”, as the case may be) was merely one of many representations of the unusual side of the most famous wintertime holiday. Folk traditions pertaining to the season from all around the world feature a range of bizarre themes; these include the Tió de Nadal of Aragonese and Catalan mythology, which is a small, blanketed log which is “fed” in the several days leading up to Christmas, upon which it then “poops” out gifts for children. (Strangely, this is but one of the oddly-fecal traditions associated with Christmas around the world; for a similar, hilarious Christmas tradition, check out what is known as "The Caganer" here).

Yet perhaps there is no figure associated with "the dark side" of Christmas so well recognized as that of Krampus, the "Belly Slitter", who in Austrian traditions was believed to capture naughty children and beat them with branches... that is, when he isn't feeding them to the very fires of hell. 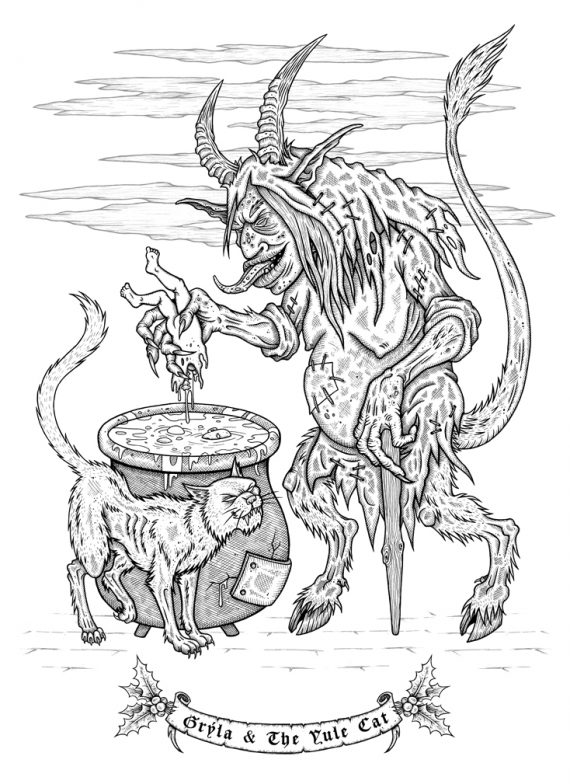 One of the best places you'll be able to find Krampus this Christmas (that is, if finding a monstrous Christmas Sasquatch with kindred among Satan's kind is what you're into) is within the pages of artist Sam Shearon's new Christmas-themed "creepy" adult coloring book.

For those who didn't know it yet, adult coloring books are kind of a "thing" at the moment, and Sam's offering is sure to be one of the best of the bunch, as it incorporates not just creepy elements pertaining to Christmas, but also a few cryptozoological references that the modern monster-hunter will certainly appreciate (in fact, we've covered Sam's personal inquiries into cryptozoology in the past here at Mysterious Universe, in an article titled The Cryptozoological Horrors of Mister Sam Shearon).

"Winter has a darker and richer lore than Halloween," Shearon says. "For centuries, people have feared creatures from ancient legends born of this time of year. Tales such as giant hairy monsters who live in the mountains and will snatch you up and eat you were used to ensure children didn’t wander off in the snow and become lost." 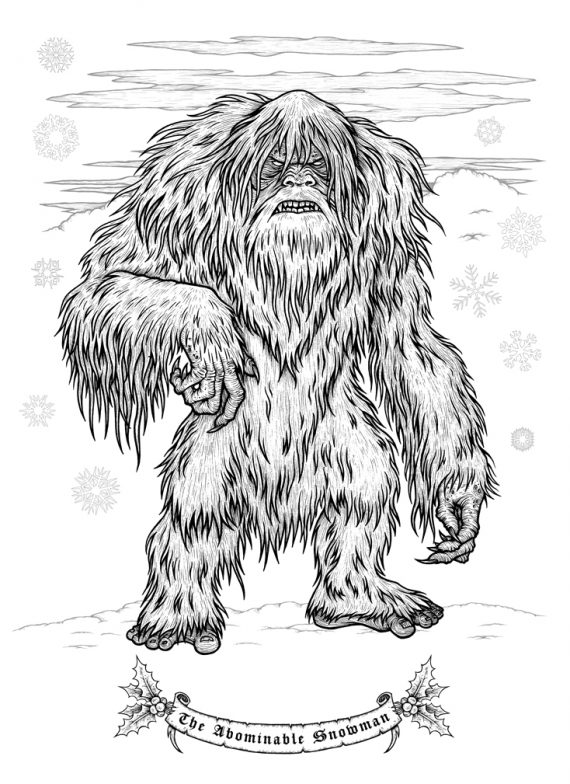 Such is indeed the case with the Abominable Snowman, which among traditional Sherpa beliefs, was a "mountain devil" known for carrying children away into the night. Shearon's coloring book, which is officially titled, "Mister Sam Shearon's Creepy Christmas: A Merry Macabre Coloring Book", not only features among its pages that most dreaded Himalayan beast, but also folkloric caricatures from parts of Scandinavian, British, and even North American cultural traditions.

On the subject of North American traditions, Shearon chose to include the Wendigo amidst the Christmastime monsters in his book as well. Long suspected of being one of the many cultural motifs that is perhaps inspired by legends of Sasquatch among the American Indians, the Wendigo is believed to be a cannibalistic creature, mostly among Algonquin traditions. You can learn more about Shearon's book, and the other monsters it features, at the book's official website.

For those who still celebrate the "creepy" side of Christmas, Shearon's new coloring book would likely fit in nicely alongside the macabre works of M.R. James, or any similar stories of a particularly eerie air that would befit a Christmas fireside. Finally, if you still haven't quite had your fill of the creepiest, or just the downright weird things associated with Christmas in other parts of the world, check out this roundup which is certain to forever change the way you see "the most wonderful time of the year."

Bigfoot: A Tooled Up Monster?