"Is that possible?", exclaimed Michel Ardan, "the earth has two moons?"

"Yes, my friend, it has two moons, although it is usually believed to have only one. But this second moon is so small and its velocity is so great that the inhabitants of Earth cannot see it. It was by noticing disturbances that a French astronomer, Monsieur Petit, could determine the existence of this second moon and calculated its orbit. According to him a complete revolution around the Earth takes three hours and twenty minutes."

Scholars of classic science fiction may recognize the passage above as an excerpt from Jules Verne's story, From the Earth to the Moon, in which the voyagers on their way to Earth's lonely lunar outpost discover that it isn't so lonely after all, as it was accompanied by a smaller, second moon, described as "a simple meteorite but an enormous one, retained as a satellite by the attraction of the Earth."

A "moonlet", in other words.

In past articles here at MU, I've discussed the way that the U.S. Government's actual search for moonlets in the 1950s helped spawn theories of an alleged "alien satellite" that has orbited Earth since around the end of the last Ice Age, known as the "Black Knight" satellite. These smaller orbital objects would actually be asteroids that were somehow caught in Earth's orbit, precisely as Verne described them in his story. However, there has never been convincing evidence that such a "moonlet" has ever existed; Clyde Tombaugh, the astronomer who discovered Pluto, was tasked with spotting such an object beginning in 1954, and concluded after a three-year search that no such objects could be found.

Coming back to Verne's story, it should be noted that the famed French author would often drop references to real life places, as well as real-life scientists and their discoveries. In his 1886 novel Robur The Conqueror Verne's character makes a reference to "the striking experiments of Captain Krebs and Captain Renard", which had involved the first free flight of the French army's airship La France.

Such was the case in From the Earth to the Moon as well, with the reference to "Monsieur Petit" and his discovery of a second moon. The real-life astronomer in question, Frederic Petit, was director of the observatory of Toulouse, and one evening in 1846, he claimed he had made an incredible discovery: a second moon in orbit around our planet. Two observers at the Toulouse observatory had claimed to observe the object initially, and soon, independent confirmation of this second moon's existence was offered by an additional observer at Artenac in late March of that year. Despite the sensational claim, interest in the proposed discovery died down somewhat, that is, until 1865 with the publication of From the Earth to the Moon. 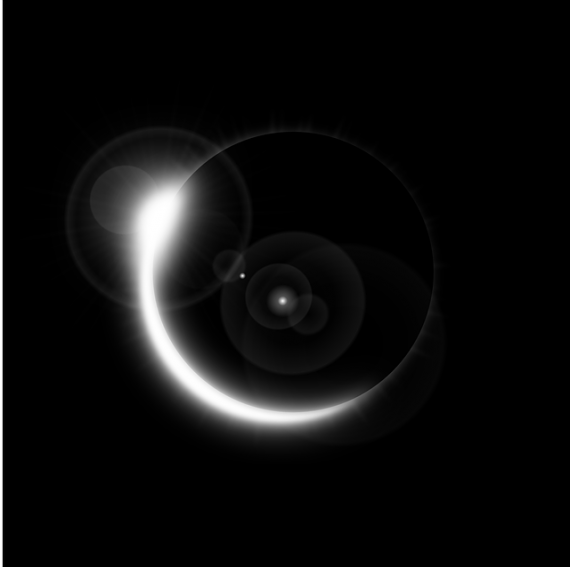 Petit was not the only individual who believed he had discovered evidence of a second moon around the Earth. Two decades later, Canadian weatherman E. Stone Wiggins also claimed to have seen a second moon in 1882, although he didn't publicize this theory until two years later, when he was cited in the New York Tribune. Earlier that year in May, an unexpected lunar eclipse occurred, which Wiggins believed was obvious evidence for the existence of the proposed moonlet he observed two years earlier.

In 1907, the June 12 edition of the Edmonton Bulletin featured an article on Wiggins and his discovery, recounting his "discovery" thusly:

Prof. E. Stone Wiggins, who some years ago was famous throughout Canada as an authority on weather problems, but who of late years has preserved a dignified silence on the great topic of perennial interest, has at last been induced to explain to a waiting public the wherefore of this long lingering of winter in the lap of spring. His explanation published recently is a novel and original one, namely, that there are two moons in the sky. He premises his explanation by stating the sun has nothing to do with the case. The prevailing cold weather, he says, must be due to a planetary attraction, for it is general all over the globe.

“In 1882,” says Prof. Wiggins, “I discovered another moon. It is now at that point of its orbit nearest the earth, and is producing all the aforementioned phenomena in the earth’s atmosphere. I knew this moon existed because our visible moon showed a disturbing force in her revolutions around the earth, for which astronomers could not account.

“In 1884 I published a letter in the New York Tribune claiming the discovery, giving the evidence of trustworthy persons in Michigan who declared to me that the sun was eclipsed on May 16 of that year, the sky being perfectly cloudless and when our visible moon was in another quarter of the heavens and therefore could not possibly eclipse the sun. This dark moon has an immense carbon atmosphere in which the dun develops little or no light; but it has often been seen by persons who happened to be in the range of incidence of its reflected light."

“A green crescent moon of the most brilliant yet delicate shade, was recently seen in New Zealand. The phenomenon was visible for only half an hour. It has been seen since in North America, but each time only about 29 minutes.” 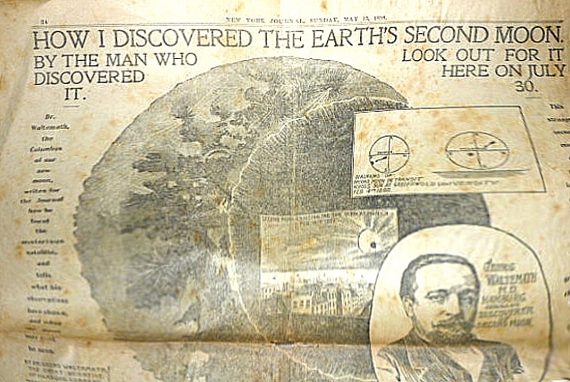 Naturally, Wiggins believed this unusual "green moon" had been the very same that he had found as far back as 1882. By 1907, Wiggins further bolstered his claim by the additional testimony of German scientist Georg Waltemath, who in 1898 also claimed to have observed a second moon through his telescope, and even calculated the object's orbit and motions. As Wiggins had suggested, Waltemath described the object he observed as being too dark to reflect enough light to become visible to the naked eye, and that the moonlet could only be seen through a telescope.

Waltemath and Wiggins' observations were never confirmed, of course, and no further evidence of any "second moon" orbiting the Earth was ever found. Nonetheless, it is interesting to note that as recently as April of this year, an asteroid was observed in an apparent quasi-orbit around Earth, whilst in its actual orbit around the Sun. This unusual orbiting object, named 2016 HO3, is far too distant to actually qualify as being a "second moon," although a similar observation was made in 2006, which led to the discovery of 2006 RH120, another object orbiting the Sun which appeared to orbit Earth for short periods in 2006 and 2007.

While they may have been off on their calculations about a "second moon", perhaps there were indeed objects that scientists like Waltemath and Wiggins were seeing after all, which, like the more recent observations of asteroids that occasionally share their solar orbit with the Earth as well, may have only appeared visible for a short time.

For those interested in a bit of further reading that pertains to hypothetical planets and moons, this webpage features a treasure trove of such alleged discoveries, and the science behind them.