There can be no doubt that when it comes to the field of Cryptozoology, one of the most famous, so-called "cryptids" of all time is Mothman - the red-eyed, winged beast made famous in John Keel's classic book, The Mothman Prophecies. Other titles on the subject include Jeff Wamsley's Mothman: Behind the Red Eyes, Gray Barker's The Silver Bridge, and Joedy Cook's Mothman Casebook. Mothman has also been the subject of several movies and documentaries. They include the 2002 movie version of The Mothman Prophecies (which starred Richard Gere and Laura Linney). Although a lot of people in Forteana took issue with certain aspects of the story, I thought the movie was a good, creepy, atmospheric production. There is also Eyes of the Mothman, which is an excellent documentary on the 1966-1967 events at Point Pleasant, West Virginia. Then, there is the SyFy Channel's movie, Mothman, which is almost (but not quite) as terrible as Chupacabra vs. the Alamo. And there is another: The Mothman Curse.

A couple of days ago I received in the mail a DVD copy of The Mothman Curse and, when the work day was over, I sat down to watch it. What did I think of it? Well, let's see. Before I get to my thoughts on the 2014 movie itself, here's the plot summary, from the makers of the movie: "A supernatural thriller based on the terrifying legend of the Mothman. Rachel and Katy work together in a large, empty museum. But lately, Katy notices slight, disturbing changes in her friend, when a menacing, dark shadow appears to be watching them night after night, drawing them both further into fear and madness. As they investigate deeper, the legend becomes a very real, living nightmare."

So, what did I think of it? Well, on the plus side, the movie is actually put together pretty well. You might be forgiven for thinking - at first, at least - that it was a "found-footage" movie, as the whole thing is shot in black and white, with lots of shadows, night-vision, jerky movements, and a handheld-camera-type scenario. But, it's actually not. Imagine The Blair Witch Project meets the Paranormal Activity movies and that will give you a good sense of how The Mothman Curse looks, at least. The production team - Wild Eye Releasing - uses music and a lot of sound-effects in a good, satisfying way. And, although the actors are not big names (Rachel Dale, Stephen Glover, Daniel Mansfield, Darren Munn and Katy Vans), they come across well, and the acting is pretty good and doesn't seem stilted or forced.

The grainy, shadowy footage that dominates the old and cluttered museum in which Katy and Rachel work is used to good, claustrophobic effect. As are the shots of bleak and ruined buildings, crashing waves, and shadowy woods. I also thought it was a good thing that we only get to see very brief glimpses of the Mothman - in the shadows, in the dark recesses of bedrooms, and lurking in silhouette-style outside of the main-door to the museum. In other words, in this movie Mothman is not a CGI-driven monster on a killing spree. It's far more subtle than that, with the stars seeing the beast out of the corners of their eyes, and in their dreams (or, more correctly, in their nightmares). 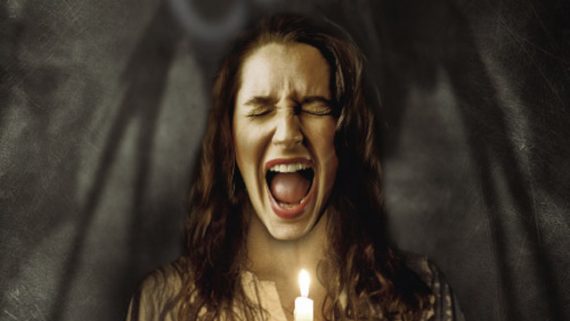 Now, we come to the downside - and it's a big one. The audio is, frankly, awful. Like so many of today's movies, the sound-effects are thunderous, while the voices of the actors are muffled in the extreme. From the very beginning I was forced to turn up the volume of my TV set to what - under normal circumstances - would be earsplitting levels. But, even then, it was still difficult to figure out what on earth was being said. Of course, when the sound-effects suddenly kicked in - and with my volume still on high - it sounded like an atomic bomb had just gone off over my hometown of Arlington, Texas. It was a problem that lasted throughout the movie. And, having read a number of online reviews of the movie, I see that I'm not the only one complaining about the volume issues.

The Mothman Curse is not a great production. But it is watchable - if, that is, you can get past the volume issues. Watching The Mothman Curse is partly enjoyable, but also very frustrating. After all, when the actors can't be understood properly, it hardly makes for good viewing!