The Sinister Saga of a Dragon Cult

The summer of 1969 was a very strange period in the quest for the truth behind the legend of the Loch Ness Monster. It was a decidedly alternative period, too: information surfaced on a secret "dragon cult" said to have been operating in the vicinity of the huge loch. In early June of that year, three American students paid a visit to Loch Ness. The purpose was to check out Boleskine House, an old hunting lodge which burned down in 2015. It had once been owned by one of the key players in the world of the occult. We're talking about none other than Aleister Crowley.

While walking around a centuries-old cemetery located close to where Boleskine House stood, the students came across a strangely decorated piece of cloth; a tapestry, one might say. It was roughly four-feet by five-feet and was wrapped a large sea-snail shell. It was covered in artwork of snakes and words that were soon shown to have been written in Turkish. One of the words translated as "serpent," which was a most apt description for the beast of Loch Ness. Turkey has its very own lake monster, which is said to dwell in the waters of Lake Van.

Of the several other people who had the opportunity to see and examine the tapestry in June 1969, one was a dedicated Nessie-seeker named Frederick "Ted" Holiday. He couldn't fail to make a connection between the Loch Ness Monster and the dragon- and serpent-based imagery. Collectively, the above led Holiday to conclude that all of this was evidence of some kind of clandestine cult operating in the area. 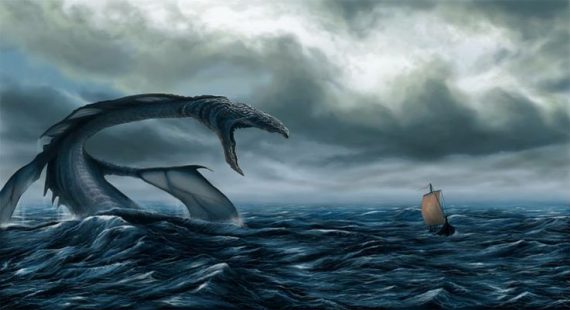 Holiday knew only too well that Aleister Crowley was linked to all manner of secret societies and the occult - and to Loch Ness itself. These were further factors that led Holiday to suspect the presence of a dragon-worshiping group in the area. As he began to dig even further into the story, Holiday uncovered disturbing (but never proved) rumors of alleged human sacrifice in the wooded areas surrounding Loch Ness. As well as attempts by the secret group to try and invoke supernatural serpents from the dark waters of the loch. As intriguing as all of this is, the idea that regular human sacrifice was performed at the loch in the late-1960s - and could have been achieved without those involved ever getting caught - is extremely unlikely.

The mysterious group at Loch Ness, Holiday believed, was said to worship Tiamat, a terrifying Babylonian snake-goddess, or sea-dragon, who was revered as much as she was feared. Encyclopedia Mythica says of Tiamat: "In Babylonian myths, Tiamat is a huge, bloated female dragon that personifies the saltwater ocean, the water of Chaos. She is also the primordial mother of all that exists, including the gods themselves. Her consort is Apsu, the personification of the freshwater abyss that lies beneath the Earth. From their union, saltwater with freshwater, the first pair of gods were born. They are Lachmu and Lachamu, parents of Ansar and Kisar, grandparents of Anu and Ea."

If one knew the ways of the ancients, Holidays suggested, one could still call upon the power and essence of Tiamat, as a means to achieve power, wealth, influence, and sex. Such rituals were definitively Faustian in nature, however (as they almost always are). The conjurer had to take great heed when summoning the spirit-form of Tiamat, lest violent, deadly forces might be unleashed. It was highly possible, thought Holiday (as he suggested in correspondence with other Nessie seekers), that the monsters seen at Loch Ness were manifestations of Tiamat. Albeit in a very strange, latter day incarnation, and specifically provoked to manifest by that aforementioned cult.

Nothing was ever conclusively proved, but the entire situation left a bad taste in Holiday's mouth, made him deeply worried for his own safety, and eventually helped convince him that the legendary creatures of Loch Ness were supernatural in nature.

The Mystical World of Mysterious Books of Magic