Vampire Bats are Acquiring a Taste for Wild Pigs

Vampire bats don’t have much going for them. They’re not cute. They live on the blood of warm-blooded mammals, including humans. They carry and spread diseases. Do they have any redeeming qualities? Possibly. A new study finds that vampire bats have developed a preference for the blood of wild pigs and could be helping to reduce the population of the feral hogs creating havoc in Brazil. Is this the kind of PR boost that could turn vampire bats into misguided toothy flying squirrels?

Invasive feral pigs are a big nuisance in Brazil. They first arrived 200 years ago when domestic pigs escaped into the wild. A second wave came in 1989 when wild boars from Uruguay came to southern Brazil. The third wave in the 1990s was the worst and it’s directly due to human greed. Wild boars were imported from Europe and Canada to breed with domestic pigs and create a better hog. The half-breed javaporcos proved to be too much trouble and non-profitable, so they and remaining wild boars were released across Brazil, allowing them to dig up farms, gardens and anything else in front of their snouts.

Enter the vampires. Like humans, vampire bats have discovered that everything – even blood – tastes better when flavored with bacon. Anything that draws bats away from livestock and humans (in 2005 – a particularly bad year - there were 23 bat-related deaths and over 1,300 people seeking treatment for bites) should be a good thing, right? 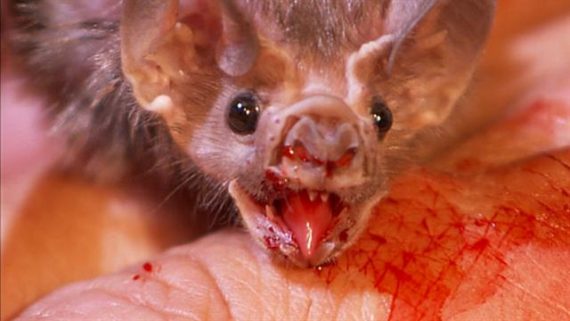 Felipe Pedrosa, Sao Paolo State University Ph.D. student and co-author of a new study on Brazil’s vampire bats in Frontiers in Ecology and the Environment, used photographs and videos from Brazil’s Pantanal region, a tropical wetland in the state of Mato Grosso do Sul, and the Atlantic Forest on the Atlantic coast to research the feeding habits of the bats. He and fellow bat watchers expected them to attack cattle but were surprised at how often they went local wildlife like deer, tapirs and feral pigs. In one area, ten percent of the attacks were on wild hogs.

Which came first – the hogs or the vampire bats’ taste for ham? The study suggests that the overabundance of hogs coupled with more land being converted from cattle ranches to sugarcane farms drove the bats to the boars and now they’re addicted and actively seeking them out over other mammals.

Again, that should be good news for Brazilians, right? Unfortunately not. While they may not be getting attacked by vampire bats, they’re eating wild boar, deer and other bushmeat that are picking up the rabies and other diseases. That popularity in bushmeat means more jobs for hunters who, along with their dogs, are becoming infected by bites from bats and other animals.

So the problem was caused by humans and exacerbated by them What’s the solution? Kill the beasts, of course. Unfortunately, vampire bats are scarier to look at but more beneficial than feral hogs – their saliva contains properties that may be used in anticoagulants. That means eradicate the feral hogs, which is obviously difficult to do or there wouldn’t be so many of them.

Once again, it’s another nice mess we humans have gotten ourselves into.