Look inside the body of a 2,000-year-old giant mummified crocodile form Egypt and you would expect to find dried up organs, dust, crocodile bones and possibly Egyptian bones. The last thing you might expect to find would be individually mummified baby crocodiles. That’s what a worker at a museum found by accident using a new 3D scanning machine.

It's a combination of good hardware (the scanner), good software (Inside Explorer), a good pair of eyes and luck.

On November 18, 2016, the Dutch National Museum of Antiquities opened its new Egyptian galleries to the public and unveiled an advanced 3D visualization experience that was developed by Interspectral, a Swedish visualization company co-founded by Claes Ericson. According to Ericson, the new exhibit uses CT scanning to produce 3D images of what’s inside mummies and other delicate artifacts without harming them. These images allow museum experts and the general public to see the mummies, which had been examined numerous times before, in an entirely new way. 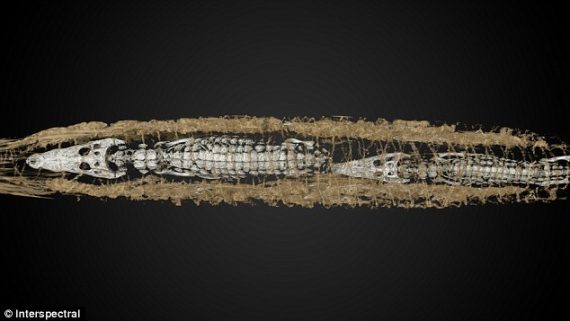 It was a big surprise that the new interactive visualization technology provided by Interspectral made many new details visible, as the mummies had been scanned before. The most exciting discovery was that wrapped inside the larger adult crocodile mummy, were many baby crocodiles, whose existence were previously unknown to us.

According to museum curators Dr. Lara Weiss and Prof. dr. Maarten Raven, at Dutch National Museum of Antiquities, a technician using Interspectral’s interactive tool Inside Explorer zoomed in on one of the crocodile skeletons inside the mummy (there’s actually two – a fact discovered previously) and decided to try the zoom function on an odd part of the image. He was shocked to find it was a tiny crocodile skeleton. Further investigation showed that the baby croc was mummified and wrapped and carefully placed inside the larger crocodile along with 46 other tiny mummies. 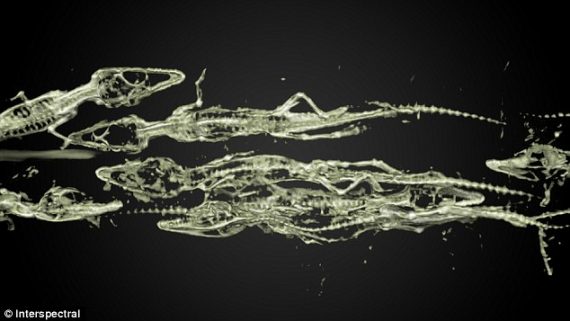 Ancient Egypt experts are unsure why the baby crocs were mummified with the larger ones. While it could symbolize resurrection, it could also be that they wanted to mummify a large number of big crocodiles but that was all they had to work with. The discovery is unusual but surprisingly not unique. In 2015, a conventional scan of a crocodile mummy at the British Museum in London show 20 tiny crocs wrapped inside the adult’s back.

It’s great to see this kind of technology used for education instead of hacking or inspecting wrapped packages before Christmas morning.

Visual Tracers: Optical Anomalies and Ghostly Phenomena Through the Ages