It’s a battle of the real versus the surreal this week in Antarctica as news stories emerged of a newly-discovered, strange, under-ice habitat filled with unusual creatures and new discussion on an old satellite image of a large under-ice thing that some are now saying was (or is) a secret Nazi UFO base. What’s up (or down) in Antarctica?

Biologist Dr. Glenn Johnstone of the Australian Antarctic Division and his colleagues were rightly shocked when they cut a deep hole in the ice over O'Brien Bay near the Casey research station in East Antarctica, dropped in a robot camera with a bright light to pick up a data logger and found it surrounded by creatures not expected to be seen in these frigid waters.

This footage reveals a habitat that is productive, colorful, dynamic and full of a wide variety of biodiversity, including sponges, sea spiders, urchins, sea cucumbers and sea stars.

The average water temperature is -1.5C (29 F) underneath this 1.5 meters (5 ft.) thick sheet of ice that is over this lively habitat for ten months out of the year. The data logger retrieved will give additional measurement on salinity, oxygen, acidity and the effects of climate change there, but Johnstone says the creatures are relatively safe and frigidly sound there.

Occasionally an iceberg may move around and wipe out an unlucky community, but mostly the sea ice provides protection from the storms that rage above, making it a relatively stable environment in which biodiversity can flourish.

Should they also start watching for Nazi flying saucers? How about big asteroids?

A UFO hunting group is claiming that a 10-year-old satellite image of a massive dark spot under the ice in the eastern Antarctic area known as Wilkes Land is proof of the existence of a World War II Nazi base, possibly used for testing flying saucers or providing alien ships with a hiding place. 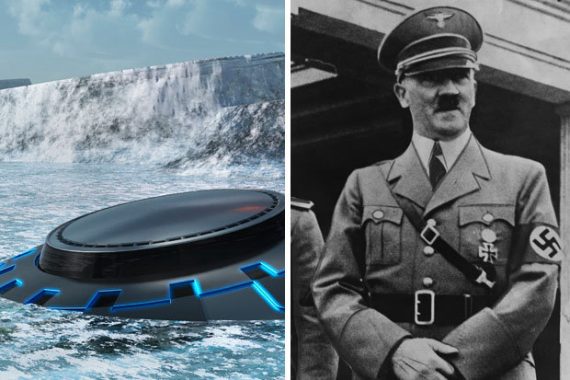 The anomaly was discovered in 2006 in images taken by NASA’s GRACE (Gravity Recovery And Climate Experiment ) satellites. It measures 150 miles (240 km) across and about 850 meters (2,790 ft) deep under the ice. Because it’s circled by a 300 mile (480 km) wide crater, researchers at the time – like Ohio State University professor of geological sciences Ralph von Freese - speculated it was an asteroid who destructive force doubled that of another famous and disastrous impact and probably caused the Permian–Triassic extinction 250 million years ago.

This Wilkes Land impact is much bigger than the impact that killed the dinosaurs, and probably would have caused catastrophic damage at the time. All the environmental changes that would have resulted from the impact would have created a highly caustic environment that was really hard to endure. So it makes sense that a lot of life went extinct at that time.

The UFO hunting group’s video points out that it sees no way to prove this, so it links the anomaly to sightings of saucer-shaped crevices in mountains, Operation Highjump (a famous post-WWII Antarctic naval expedition led by Admiral Richard Byrd) and other unexplained phenomenon on the already mysterious continent. It’s a big jump (high jump?) to then claim the anomaly is a secret abandoned UFO base, but that’s their case. This is not a new theory but may be the first to link it to the Wilkes Land crater.

It’s been a month of unusual activities in Antarctica with a crater, a crack, blue clouds, Buzz Aldrin and now some odd and unexpected but verified under-ice creatures. Until a hole is drilled and a camera dropped in, speculation and theories on asteroids and Nazi bases will continue to run – make that slide – rampant in and under Antarctica.