In 2013, two boys walking through a wooded area in Massachusetts made an unusual, and very big discovery: a massive, decomposing foot, that looked almost human.

Police who were called to observed the strange looking appendage admitted they were baffled by the find. As reported in the local Patriot Ledger Newspaper at the time, “On March 29, Sgt. Steven Leanues picked up what appears to be a decomposed foot that the boys found in the woods off Pantheon Road. Police Chief Frank Alvilhiera sent it to the medical examiner, who determined it is not human, although it appears to have five toes.”

While the examiners were careful not to leap to any conclusions, the indirect implications of such a discovery seemed obvious: could this actually be physical evidence for the existence of a creature like Bigfoot?

Quite the contrary, this was one of a few similar instances where remains of a known animal species had been misidentified, and in its state of advanced decomposition, only resembled something human. The foot, of course, was later shown to belong to a bear, rather than some massive, manlike beast. 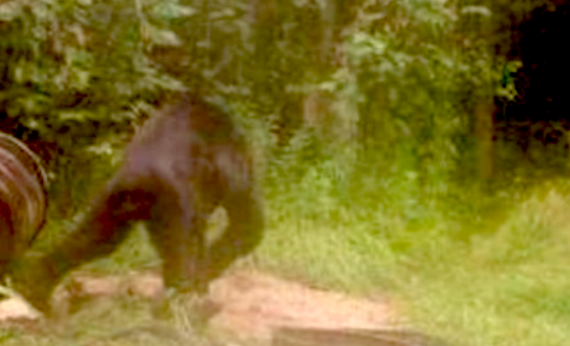 How could a bear's appendage resemble anything human, one might ask? It's actually not that difficult, considering again that such a specimen might be in an advanced state of decomposition, which removes a number of identifying details; namely the hair and claws. Also, a bear's paw features five digits like a human, and hence, the discovery of a five toed, massive decaying foot might very easily--and even eerily--resemble something like a Sasquatch. With little doubt, misshapen or indistinct bear tracks may have at times also been attributed to the legendary man beast on some occasions, though any clear set of bear footprints would presumably show the forepaw as well, which would be much more difficult to attribute to anything manlike.

There are perhaps even more bizarre cases of misidentification that have befallen the Sasquatch circles over the years. On one occasion several years ago, I recall being contacted by a researcher who granted me exclusive access to a video which purported to show a similar mysterious, humanlike appendage, hoping that I might be able to have a qualified biologist with whom I was acquainted look at the video. Before sending the video, the researcher in question noted one of the most peculiar facets of the discovery: in addition to being a large, strange looking foot of some sort, the specimen appeared to have webbed toes!

Needless to say, this had been a red flag from the outset, although the limb was indeed rather strange looking. The grainy video depicting the alleged discovery featured a pair of individuals displaying the "mystery" creature's severed limb before the camera, with few details (if any) about its origins. After obtaining a copy of the footage, I sent the video along to a biology professor I knew, Dr. Mike Stuart, who after watching it felt confidant that this was no foot of a Sasquatch or any other mystery animal: it had belonged to nothing more than a beaver. Talk about mistaken identity!

Again, one might ask how a beaver's hind foot could appear so unusual, and why was it so large? To this, Dr. Stuart mentioned that he had known of beavers that grew to as much as 90 pounds or more, and that the size of the limb in the video hadn't even been among the largest he had examined.

Bear paws are, of course, far more likely to be mistaken for mysterious remains than that of a beaver, and on at least a few occasions, bear paws have even been mistaken for human remains. In 2004, a mysterious looking hand found in a manilla envelope at a car wash was determined by two separate medical examiners to have been the skeletal remains of a hand belonging to a woman or child. As the investigation ensued, concerns began to arise over the lack of any additional remains discovered, and finally a forensic test was administered. The "human" hand turned out to be a bear's paw.

As far as the business of identifying animal remains goes, skeletal remains of bears are more commonly mistaken for being human than that of any other animal. Therefore, it only makes sense that they would occasionally be mistaken for being something large, and humanlike.

George Adamski: Hoaxer or Something Else?