While the search for new life forms on other planets gets all of the media attention, scientists looking down … way down … on planet Earth are finding bizarre new life forms that look like they came from outer space. The latest discovery of six new and strange creatures at the bottom of the Indian Ocean is proof.

Hydrothermal vents form a network of marine life in the deep, and so far we've only glimpsed one node of the network in the south-west Indian Ocean.

Dr. Jon Copley led a team of researchers from the University of Southampton and the Natural History Museum in London as they used a deep-diving remotely operated vehicle (ROV) to explore a site known as Longqi, or "Dragon's Breath," located about 1,200 miles (2,000 km) southeast of Madagascar where it is part of the Southwest Indian Ridge that bisects the ocean between Africa and Antarctica. The ROV covered an area about the size of a football field at a depth of 9,200 feet (2,800 meters). That relatively small area contained over a dozen hydrothermal vents whose chimneys or spires were over 20 feet (6 meters) high. 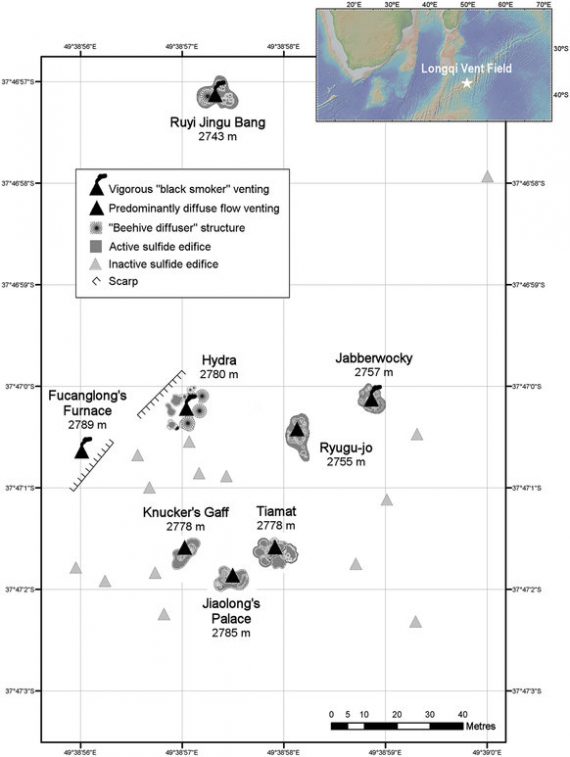 According to their recent study detailed in Scientific Reports, that’s where the team found new species of a Hoff crab, a giant peltospirid snail, a whelk-like snail, a limpet, a scaleworm and a polychaete worm. The hairy-chested Hoff crab is related to Hoff crabs found around Antarctic hydrothermal vents. The new snail has been named Gigantopelta aegis but the rest are waiting for suggestions on what celebrities they resemble.

Six new species in a football field-sized area is pretty exciting news, especially when the southwest Indian Ocean is covered with similar areas. Copley is confident that, although they’ve never been seen before, these new species and similar species live in populations around other vents. The Longqi creatures resemble others living on the East Scotia Ridge in the Antarctic and near vents in the eastern Pacific.

Finding these two species at Longqi shows that some vent animals may be more widely distributed across the oceans than we realised.

Why were Copley and his team looking in Longqi? That’s the bad news. Those vent chimneys spewing hot fluids that feed and nurture these strange creatures are also called “mineral vents” because they contain … you guessed it … minerals, including copper and gold in quantities that excite deep sea mining companies. (This is why we can't have nice things.)

Our results highlight the need to explore other hydrothermal vents in the southwest Indian Ocean and investigate the connectivity of their populations, before any impacts from mineral exploration activities and future deep-sea mining can be assessed.

Over 400,000 square miles (a million sq km) of the Pacific, Atlantic and Indian Oceans are designated as deep sea mining areas by 16 countries. Will they be destroyed for gold before any new hairy-chested crabs and their bizarre friends have a chance to be discovered?