One of the more popular and dramatic miracles seen in the Catholic Church is that of blood liquefaction. A small vial purportedly contain a bit of dried blood from an ancient saint or religious leader occasionally returns to a liquid state, usually signifying an answer to prayers, the prediction of good things to come or just the reassurance that miracles can happen. One such vial in Naples has the added feature that it liquefies like clockwork on certain days and, when it doesn’t, bad things happen. This is one of those times.

The blood is believed to belong to Saint Januarius or San Gennaro, who was martyred in the year 305. According to the legend, a small amount of his blood was saved by a woman named Eusebia. The first account of its liquefaction was made in 1382 and it eventually was reported to change states three times every year on significant anniversaries of St. Januarius … on September 19, the Saturday before the first Sunday of May and on December 16. 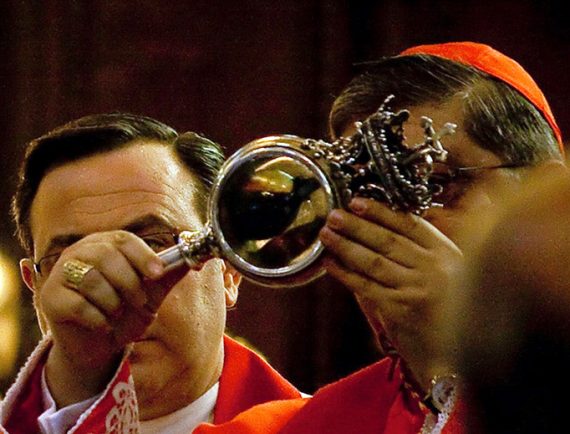 The vial is now on display in the Royal Chapel of the Naples Cathedral where thousands gather on those days to wait and pray for the liquefaction and fear the alternative. According to one report, previous failures to liquefy preceded 22 epidemics, 11 revolutions, three droughts, 14 archbishops death (within a 30-day period), nine dead popes (within a few weeks), four wars, 19 earthquakes, and three religious persecutions. That's some record, even if you factor in coincidences.

We shouldn't think of tragedies and calamities. We are men of faith, and we must keep on praying.

Monsignor Vincenzo De Gregorio, the Abbot of the Chapel who was holding the vial, tried to reassure the terrified throng that stuff happens and maybe things will be OK. Perhaps he should point out that the Catholic Church hasn’t officially sanctioned the event as a miracle and that scientists and chemists since it first happened have offered various miracle-busting, hoax-calling explanations for it – from a thixotropic gel that changes viscosity when shaken to a suspension of hydrated iron oxide, which looks like dried blood, to a red waxy substance that melts when held tightly for a while.

He could also check on status of the dried blood of Saint Patricia, John the Baptist, Saint Pantaleon and upwards of twenty other saints whose blood is said to have miraculously liquefied. 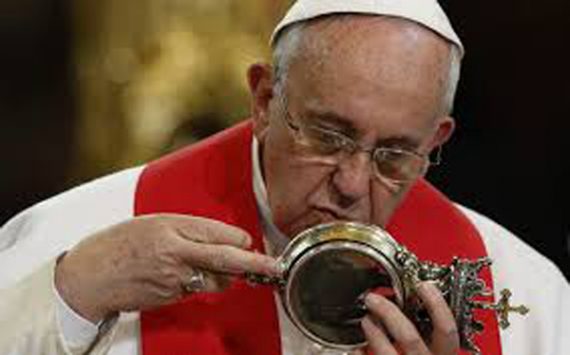 Finally, he could bring back Pope Francis. Besides its thrice-annual liquefaction, the blood also allegedly changes states in the presence of a pope as it supposedly did (partially) when Francis visited the cathedral in 2015, although it was an archbishop who declared it, not the pope himself.

Is St. Januarius sending another one of his bloodless warnings of disaster? Did the abbot not squeeze the vial tightly enough or forget to shake it?

Whether you believe in the miracle or a scientific explanation, it’s a long-lived and interesting story about a psychic device that seems to be no more or less accurate than those of the non-religious variety. Should we be any more or less worried than we already are?