Ghosts in the Machine: The Strange World of Haunted TVs

Even as we have progressed as a species and our technology has become ever more advanced, stories of hauntings and communications from the dead have always followed us around. The only difference is that they seemed to have evolved along beside us, changing along with our world and seemingly working their way into our technology. Whereas once ghosts leapt out from old decrepit houses and Ouija boards, now they seem to have a whole new world of avenues through which to break through the wall that separates their domain from our own, and these ways can be every bit as creepy, scary, and indeed terrifying as anything that has come before. One of the more interesting incarnations of hauntings to emerge in the past century is the rise of ghosts that seem to be drawn to TVs, allegedly traveling into these devices through unknown means and reaching out through the screen into our living rooms and indeed our nightmares.

Tales of ghosts in television sets have been around almost as long as the medium. Since the technology first became available to the masses there have been claims that spectral forces had a way of speaking through them or even using them as platforms from which to vault into our world. In the beginning such reports were most likely due to the public uncertainty of this new technology and its innate mysteriousness, combined with the tendency for earlier TVs to frequently have ghost or double images, fog, sound distortion, and strange static patterns, all of which served to spook the general public. All of this made the TV ripe for stories of hauntings and spectral images broadcast into people’s living rooms; a bizarre world beyond our own where spirits and ghosts could fly through the airwaves. Indeed in TV’s early days, some superstitious people who were suspicious and anxious about all of this talk of electromagnetic waves and cathode ray tubes saw televisions as almost portals into another dimension altogether, and other paranoid folk saw the new technology as the perfect way for the government or shadowy organizations to carry out covert surveillance on them. People just did not understand how TVs worked, and this made them enigmatic, often spooky machines, with all of the requisite tales of strangeness that comes with that. 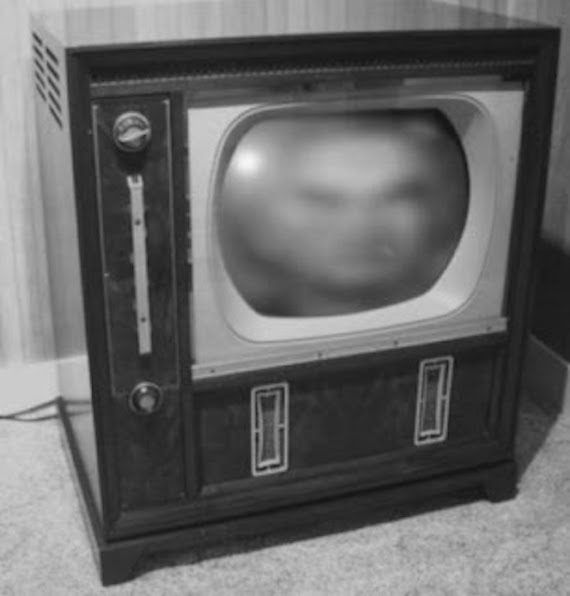 One of the earlier publicized accounts of a haunted TV set was one owned by a family in Long Island, New York in 1953. It concerns the Travers family, who claimed at the time that their TV was inhabited by the ghost of a woman who would jump out of the background of television shows or creep out from static. The woman's voice was also said to echo out from the TV, even when it was turned off or unplugged completely. The story was so well-known that it featured in an issue of the NY Times, but when curious reporters flocked to the residence to try and get evidence of the haunting the spectral woman appeared to be shy and never appeared to anyone except the family.

Another very eerie and widely circulated story occurred in 1968, when a woman in Minnesota claimed that an outstretched hand had reached out from the black murk beyond the screen of her unplugged television and pressed its palm right up against the glass. The startled woman managed to take a photograph of the alleged ghostly hand as it began to fade away, and the picture has made the rounds ever since. According to the woman and her husband, the same hand had appeared on one other occasion as well, about a year before. The photo itself is creepy but rather inconclusive, with theories ranging from an outright hoax, to a burned image or malfunction, to an actual example of a spirit trying to communicate through an electronic device.

Indeed, the whole phenomenon of ghosts trying to communicate with the living through such devices gained much traction in later years, and became known by paranormal researchers as Instrumental Transcommunication (ITC). ITC phenomena is said to occur on devices as varied as television sets, radios, computers, handheld devices such as ipods or iphones, and even fax machines, although the best known form of it is Electronic Voice Phenomena (EVP) in which the voices of spirits are recorded on audio equipment, often inaudible at the time of the actual occurrence and not noticed until playback. Throughout the 1970s and 80s the ITC phenomenon as it relates to TV really got its roots, becoming quite popular with researchers of the weird, and there were numerous supposed video and audio recordings of these TV bound ghosts at the time. The investigators in these cases claimed that this phenomenon had even been documented with TVs that were turned off or completely unplugged.

One of the pioneers of using televisions to try and pick up signals from the dead was a German ITC researcher named Klaus Schreiber, who used an apparatus that he called the “Vidicomin,” which used a video camera aimed at a TV set that was switched on but not attached to an aerial, and the signal looped the output from the camera back into the TV. This loop was said to produce dramatic results, with various faces apparently blooming out from the white noise on sets, and on one occasion an actress from Austria named Romy Schneider supposedly clearly appeared on a TV in one such session years after her death. In 1986, another ITC researcher and physicist named Ernst Senkowski claimed to have attained a clear, unmistakable image of a spirit from a TV set. In this case, a brief feed of video was picked up depicting the spirit of a dead EVP researcher named Hanna Buschbeck, who had died in 1978. In the video, she allegedly appeared recognizable yet much younger than she had been when she had died.

A similar bizarre story comes from a Swedish film producer who was also one of the early pioneering researchers of the ITC phenomenon, a Friedrich Juergenson, and who died in 1987. In the strange account, Juergenson purportedly sent out a telepathic message to fellow researcher Claude Thorlin as he lie dying, telling him that when he died he intended to try and send out a message through Thorlin’s TV during his funeral. Thorlin apparently then skipped the funeral in order to stay home and try and record the bizarre event. At the exact moments of the funeral, Juergenson’s spirit was said to have appeared on Thorlin’s TV screen just as promised, and was said to be clearly the image of the dead man. Interestingly, when he was alive Juergenson had had a hobby of recording bird songs. He claimed that one day when he had been listening to a playback of one such recording he had heard the unmistakeable voice of his dead mother saying: “Friedrich, you are being watched.  Friedel, my little Friedel, can you hear me?” with Friedel being the pet name only his mother had known and called him by.

A weird story also comes from the country of Bhutan, where there supposedly lies a haunted TV long banished to a darkened, remote hillside. In a small, remote village called Tsento, there is an old television set said to be not only possessed by the Devil, but also inhabited by the evil spirit of a dead man and at least one other ghost. The TV was said to make noises and turn itself on even when unplugged, and is said to be responsible for bringing disease and bad luck to all who own it, eventually passing through three separate families tormented by it before it was examined by a psychic who warned that the TV had to be banished. The frightened villagers then took the cursed TV to a remote location and performed a sort of exorcism rite before leaving it where it lie, where it continues to sit over two decades later. The TV is still believed to harbor evil spirits, and indeed has been blamed for infecting the whole area with its dark magic. Visitors are warned to stay away and the old, decrepit set is said to instill madness in those who come too close.

Research into ITC phenomena has gotten so in depth and weird that an actual station was set up by a group called the Transcommunication Study Circle of Luxembourg Lab, in the country of Luxembourg, with the expressed aim of recording and documenting attempts to communicate from the dead through devices such as radios, computers, and TVs. The group reported picking up hundreds of lengthy, very clear messages from an enigmatic group of beings calling themselves "The Timestream,” and who claim to be from an extra-dimensional planet called Marduk. The messages received are allegedly often relayed by a high-pitched, robotic voice from a being that calls itself the “The Technician.” Is any of this real or is it just a bunch of far-out mumbo jumbo? Who knows?

There has been a great amount of debate on whether EVP or ITC in any form carries any basis in fact, or if it is just seeing or hearing what wants to, picking it out out from the noise and imbuing it with our own meaning. However, considering the amount of work and research being done into the realm of ghosts communicating or making themselves known through modern electronic devices, it seems that the dynamic of hauntings has evolved along with the technology. When looking at these cases a very intriguing question begins to present itself, and that is, if they exist, do ghosts and spirits have the means and ability to pervade our modern equipment and reach out through the veil between the real world and the spiritual one; the barrier between life and death? Are our TVs more than just a sum of sophisticated parts to display images, but also a sort of potential portal between these realms? If so, how would it work and what would the other side have to say to us? Or is this all just as the skeptics say; reading too much into things? Whatever idea one subscribes to, it nevertheless easy to read reports such as these and be beset with a certain unease when the TV screen goes to static and white noise. After all, who knows who might be watching through the cacophony?

Ancient Mixtec Skull Turns Out To Be A Masterful Forgery