Green Snow In Russia And Snow In The Arabian Desert

Winter isn’t even here yet, but already some frosty - and strange - weather activity is appearing worldwide. First, an anomalous snow storm appeared in the Saudi Arabian desert, coating the usually hot, arid desert in a fine coating of white powder. The snow fell as temperatures plunged below zero during the last weeks of November across central and northwestern Saudi Arabia, where temperatures usually hover around 20° C (68° F) this time of year.

Local citizens were shocked and delighted by the anomaly, taking to the streets (and social media) to frolic in the rare wintry treat. Saudi Arabia has been experiencing several weather anomalies recently, including a rare desert flood.

A little farther to the east, a bizarre winter sight greeted residents in the historic Ural Mountain town of Pervouralsk in Western Russia. Rather than the typical white (or occasionally yellow) snow which Russian residents are so accustomed to seeing, a blanket of sickly green snow covered city streets last week, sparking concern and wonder at what could have caused such a strange phenomenon. 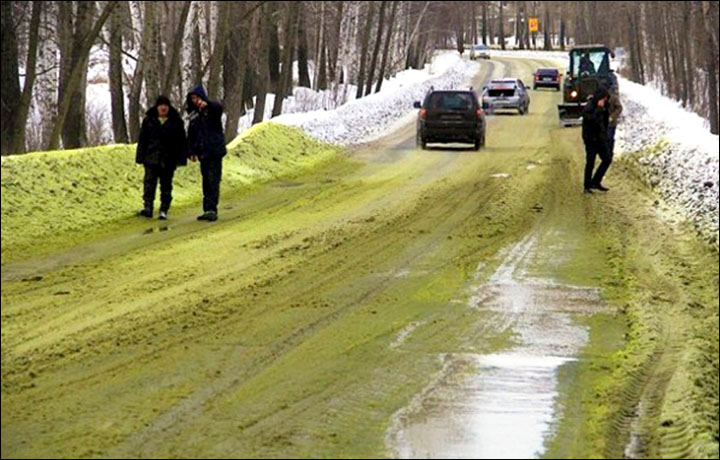 So far, the leading theory seems to be that a chemical slurry tank has sprung a leak under city streets. Pervouralsk is home to the Russian Chrome Chemicals 1915 company, which manufactures and stores chromium, used to make the shiny metal alloys that adorn car and motorcycle parts. Vladislav Oreshkin, a company spokesperson, assured residents that even if chromium is the cause, the bizarre green snow is no danger:

So the tank for our chromium waste was built in the Soviet times and it leaks. And ground waters get in there and get contaminated with chromium. We pump it out and send it to a cleaning station.There was an accident with one of the pipes that got clogged, so the well overflowed, and some of the pumped water went to the surface.

Siberia has been home to other strange snow-related anomalies lately, including the spontaneous formation of giant snowballs which mysteriously form near frozen bodies of water. And, if green snow doesn’t quite get you in the holiday spirit, you could always travel to the poles for pink snow, a phenomenon caused by snow algae (yes, that’s a thing).

2,000-Year-Old Lead Tablets May Have First Mention of Jesus