He started telling people he’s a ‘starseed’ – an alien on a mission to help the Earth.

“He” is rapper, music producer, fashion designer and Kim Kardashian spouse Kanye West and this startling revelation that he’s an alien  “starseed” comes from Life & Style magazine, which claims it got this information from doctors who treated West at the UCLA Medical Center after he was admitted from November 20th to his release on November 30th. Is his claim of being a starseed part of his medical issues or is he really an alien? Is there something else he might be hiding, implying or revealing?

For those not familiar with starseeds or “star people,” the term is believed to have originated with Native Americans and was popularized by Brad Steiger in his Gods of Aquarius book where he described them as "humans who come from a special gene pool linked to visits by extraterrestrials". While it sounds similar to the ancient astronaut theories of aliens visiting Earth and impacting human history, those claiming to be star people or starseeds today are more often described as part of a New Age movement

According to those who believe they are starseeds, common signs a person might be one include looking at a spot on the nighttime sky for no reason, feeling a familiarity with that spot or star, feeling that Earth is not your home and wondering if you’re from another place in the universe. Those sound kind of vague and Brad Steiger doesn’t help when he describes the physical traits of star people, which include compelling eyes, personal magnetism and charisma, hypersensitivity to light and sound, swollen joints and pain in the neck (the feeling, not the personality trait).

One criticism of the starseed/star people idea is the emphasis on the quality of extreme charisma. That takes attention away from the astronomical stars and gives it to the celebrity kind ... like Kanya West, who had charisma even before entering the orbit of the Kardashians. (Can you become a star person by marrying one? Asking for a friend.)

However, another characteristic bears further scrutiny in Kanye’s case. The ‘seed’ in the name implies communicating to activate other star people and pass on details of the "mission." Kanye West has recently been in close contact with another extreme charismatic – Donald Trump. Could he taking the place of Tom DeLong in the Trump administration … keeping our leaders informed of alien activity? Pushing them to reveal it? Making sure they DON'T reveal it? Or is Kanye activating Trump as a starseed? Trump activating Kanye? Will either admit to being the activated and not the activator? 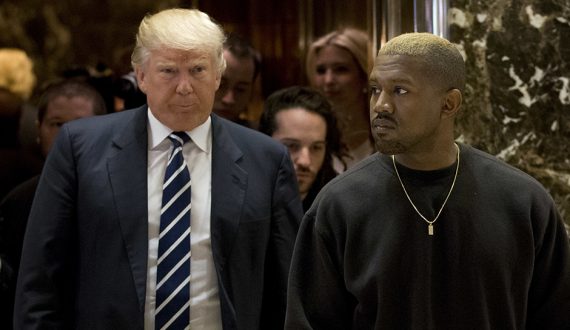 Or, as a psychologist not treating West suggests, is he just suffering from schizoaffective disorder whose symptoms include hallucinations and delusions?

Or is this a promotion for a new reality show?

It's Kanye West. Who knows?