Antarctica is getting a lot of attention these days and not all of it is good for the small group of scientists currently living on the surface nor the lost civilization allegedly buried underneath it. A massive crack is growing and a huge chuck of ice may break off soon. A theory pops up again about rapid polar shifts. Throw in the possibility of discovering Atlantis and a prediction by Edgar Cayce and you’ve got the makings of the world’s coldest conspiracy theories. Are any of them true?

Let’s start with the crack. The ice has been actively separating since at least 2011 in the Larsen C segment of the Larsen Ice Shelf in the northwest part of the Weddell Sea. Larsen C is the southernmost and largest section, often compared in size to Scotland or the U.S. states of New Hampshire and Vermont combined. The crack is now 80 miles (130 km) long, 350 feet (196 meters) wide and .33 miles (.5 km) deep. If it follows its current path across the entire Larsen C ice shelf, it will produce an ice chunk measuring 2400 sq. miles (6200 sq km) or about the size of the state of Delaware or Prince Edward Island. 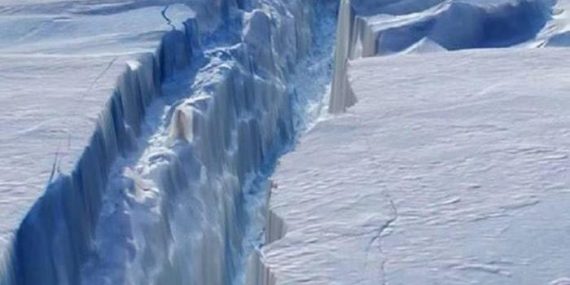 According to researchers from Project MIDAS, a British Antarctic Survey, that would be ten percent of the ice shelf – a massive amount of ice but not enough to raise sea levels worldwide. However, it could cause other ruptures behind it and eventually the coastlines would begin to disappear as a result.

The earth will be broken up in many places. … in the Antarctic off Tierra del Fuego will be land, and a strait with rushing waters … then we may know it has begun.

Followers of Edgar Cayce point out that he predicted similar apocalyptic events in Antarctica. He also made many references to Atlantis, although he put it in the Atlantic Ocean. However, a theory has resurfaced recently putting the location of the lost city in Antarctica.

Charles Hapgood is the best known proponent of crustal displacement or the pole shift hypothesis which theorizes that rapid shifts of the Earth’s poles and movements of its crust meant that large areas of Antarctica were ice-free and balmy enough for human cities only 12,000 years ago. Hapgood researched Atlantis, including the famous Piri Reis and Oronce Finé maps that allegedly show Antarctica when it was ice-free. Hapgood believed they were accurate and made by an advanced civilization … Atlantis?

Will the Larsen C crack expose an icy Atlantis? No one knows yet if it’s even over where the city might allegedly have been. Then again, perhaps it’s the presence of Atlantis underneath it that’s causing the crack. Throw in the alleged pyramids found recently, the various UFO sightings over the years, John Kerry’s recent visit and astronaut Buzz Aldrin getting sick at the South Pole (what did he see?) and there’s enough dots to connect to consider a Larsen-Cayce-crustal-Hapgood conspiracy. Throw in the dot over the fact that Hapwood worked with medium Elwood Babbitt who studied at Edgar Cayce's Association for Research and Enlightenment and the dots become a circle.

The Larsen C crack is a serious issue with potentially catastrophic  consequences. Is it so far-fetched that someone or some thing – past or present – bigger or smarter than us - is giving Earth a warning? Would you peer into the crack to find out?