In late October 2016, a massive explosion destroyed a building in Fugu County in northwest China, killing at least 14 people and injuring at least 147. A few weeks later in early December, another explosion was heard in Fugu County. This time, a crater was found in the ground spewing flames and unidentifiable metal parts were scattered around. What’s going on in Fugu?

The crater was discovered on December 12th by residents of Zhangjiapan village in Fugu County who had heard a loud explosion and went to investigate. What they found was a crater estimated to be between 3 and 5 ft long and 1.6 feet wide with flames burning at its bottom. After extinguishing the fire, the villagers found … nothing. That was puzzling since some of them reported seeing an object fall from the sky after the explosion.

By this time the local police had arrived and found three objects, including a large metal ring with legible numbers and lettering that was spotted on a rooftop. That rules out aliens (at least aliens using their own language and numbers), but neither the police nor government officials have given any other explanations.

Could the boom, crater and pieces be related to the October explosion? Let’s hope not. Fugu County investigators believe that blast was the result of illegal explosives or poorly regulated chemicals being stored in a residential apartment. Why?

For one thing, they’re extremely easy to get. Fugu is in Chinese coal country and explosives and detonators for legal and illegal mining are cheap to obtain. Because blasting materials are so available there, police say they’re often used to settle disputes. Gee, haven’t they heard of lawyers, guns or rock-paper-scissors?

There are still some locals who want to believe the mysterious and still unexplained crater is from an alien spacecraft or weapon. Is some benevolent alien race trying to tell the residents of Fugu County to switch from dynamite to diplomacy? If so, couldn’t they come up with a better way to send a message? Have they been burned by emails too?

Until the causes of these explosions and the crater are found, Fugu residents will be watching the sky and their neighbors. They should probably watch where they walk too. 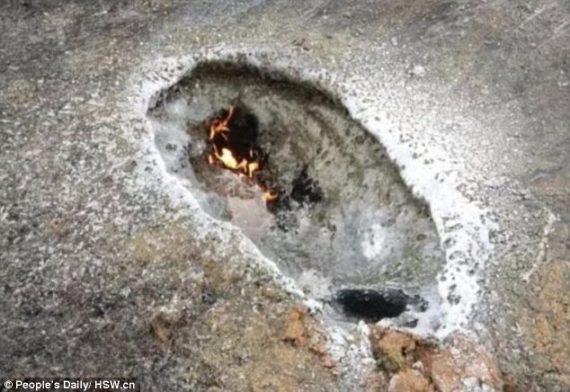 The Strange Streaking “Projectile” of Long Island: Was it a “Ghost Rocket”?