Traveling at one-fifth the speed of light, a spaceship launched today could reach the nearest star in 20 years. NASA is considering a spaceship made from a single silicon chip and propelled by a laser beam – a design approved by no less than Stephen Hawking – to achieve this but faces the challenge of how to deal with functional problems on the voyage. Now engineers may have solved this problem. Will we see a nano-starship be launched and arriving at Alpha Centauri within a generation?

At the International Electron Devices Meeting held last week in San Francisco, NASA’s Dong-Il Moon unveiled the solution to making sure a silicon nano-starship will survive 20 years of radiation bombardment intact – the self-healing transistor. Self-healing chips have been around for years but they don’t address the radiation damages encountered in space. Working with the Korea Institute of Science and Technology (KAIST), NASA’s Dong-Il Moon – who presented research at the meeting – is developing a new gate-all-around nanowire transistor that will solve the radiation problem. 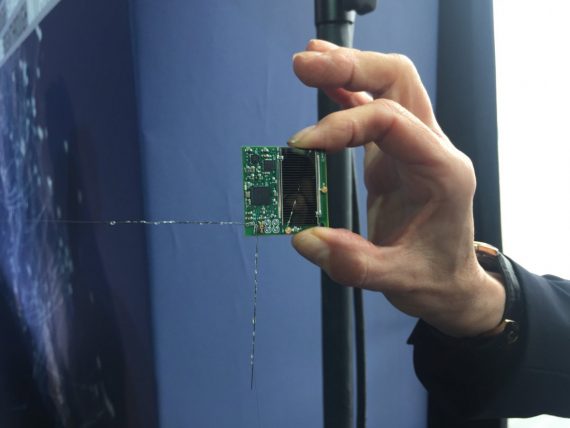 How? First, instead of conventional fin-shaped transistor channels, the gate-all-around nanowire transistors use nanoscale wires for channels. This allows the gate to completely enclose the nanowire for protection. What happens if radiation damage occurs anyway … as NASA knows it will? An extra contact will be added to the gate that will have a current passing through it. That current will heat the gate and the nanowire which will repair the problems caused by radiation.

But wait … there’s more to these incredible gate-all-around nanowire transistors. Their minute tens-of-nanometers size makes them an incredibly tiny target for cosmic rays. That nanometer size also cuts down on the weight of the already tiny spacecraft, making it easier to hit that one-fifth the speed of light velocity and 20-year travel time to Alpha Centauri. Throw in the fact that this also cuts down on the cost of the spacecraft and the total mission and it sounds like the Alpha Centaurians need to start working on a “Welcome” nano-mat.

There’s just a few small but bigger-than-nanometer hurdles to hurdle. Self-healing is amazing but not infinite, so the chip ships will have to be shut down occasionally – possibly for years – to allow for the recovery to take place a finite number of times. KAIST is hoping a junctionless transistor could heat the channel and do the healing during normal operation. NASA researchers are working on embedded microheaters.

The biggest hurdle is the fact that silicon foundries aren’t yet equipped to make gate-all-around transistors with gate lengths smaller than 5 nanometers until the early 2020s. That moves the estimated time of arrival on Alpha Centauri out to around 2040.

The good news is, scientists are talking about it, Stephen Hawking approves of it and Russian billionaire Yuri Milner wants to fund it, with some extra money possibly thrown in by Mark Zuckerberg. Sounds like Nano-Starships are an idea worth waiting for.