If you’re looking for the graves of vampires, it seems the go-to place these days is Poland, where a number of medieval cemeteries are turning up corpses buried in strange manners that show they may have been suspected of being vampires. New studies of these corpses and the burial practices suggest there may have been other reasons for the fears of those left behind.

According to Polish media, skeletons found recently in three graves in a cemetery in Górzyca, a village on the Polish border with Germany, that were buried there in the 13th or 14th century showed signs of mutilation that generally indicate those burying them feared the dead were vampires.

Discovered by us burials were on the edge of the cemetery and were buried very deep under the earth's surface - one of them was up more than two meters deep.

Making it difficult to dig out of a grave was just one of the less macabre signs, says archaeologist Krzysztof Socha of Fortress Museum Kostrzyn, leader of the excavations in Górzyca. Two of the skeletons were a veritable index of vampire burial practices. Some of their bones were deliberately scattered around or placed in reverse locations – right leg where left leg should be and left on the right. Socha believes this may have been done when the remains were moved from the main part of the cemetery to an outer section where the feared and the odd were buried.

One skeleton of an old woman was buried face down - a practice that would force a vampire attempting to rise out of a grave to go in the opposite direction instead. She also had her knees broken – possibly to slow down her chasing speed if she managed to escape anyway. Two of the skeletons had their heads cut off, another sign of vampire fears, while the third had its head placed between stones.

The most interesting mutilation found in this cemetery was the spinal piercing. One skeleton appeared to have been pinned down by a stake piercing its sacrum, - the triangular bone in the lower back – while the other had a hole right in the middle of the spine. This type of staking was believed to be helpful in keeping the vampires securely pinned down in their graves. 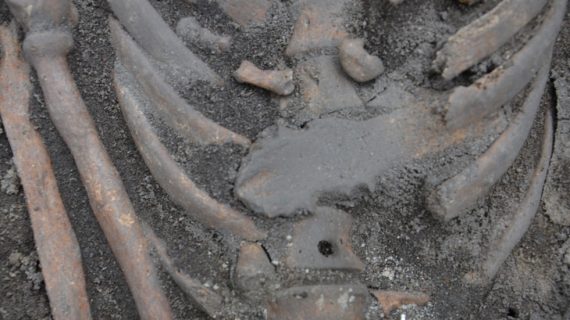 The procedures described occurred after death. Most likely, the locals decided that the recently deceased people are vampires, or persons responsible for occurring around the massive death or other tragic events.

Socha says these three were possibly being blamed for the plagues and other unexplainable-at-the-time medieval diseases attacking Górzyca and other Polish villages. They were most likely singled out because they also suffered from mysterious-at-the-time ailments like cholera. It appeared two of the people had a bone deterioration disease known as kyphosis, causing the woman to be hunchbacked and the man to walk funny ... sure signs they were medieval vampires.

However, the third skeleton belonging to a 30-ish male showed no signs of disease or deformity, yet he was the one staked through the spine with his head between stones. Why? Socha says he will continue to study the remains in the cemetery and hopes to find the answer.

Better keep some garlic, antibiotics and a stake handy, Krzysztof.