New Revelations on Roswell From Welder at Crash Site

If true, this is one of those revelations that could confirm what many people say happened near Roswell, New Mexico, in 1947. It also contains information about what was happening before the incident that could change everything we know about it.

On November 11th, MUFON (the Mutual UFO Network) received a report (case 80350) from someone (no name given) claiming he’s an engineer and was a staff member at the University of California at Santa Cruz in 1970 when he met a man (again, no name given) who claimed he was a welder in Roswell who was called upon in July 1947 to cut open something strange.

The individual I interviewed was a welder by trade and after the war was employed at the Roswell Air Force base welding jigs and fixtures for servicing aircraft. 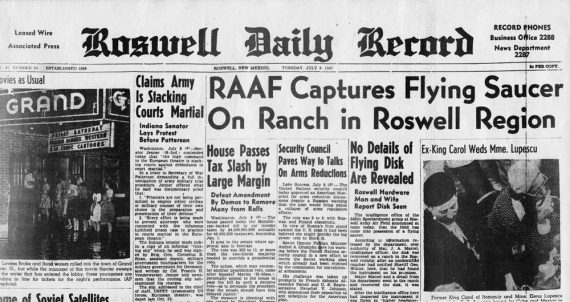 The engineer said that the welder claimed he was taken to the desert where he saw a flatbed truck loaded with what appeared to be wreckage and soldiers scattered all around picking up pieces of something from the ground.

He said they drove a little farther out of sight from the wreckage and came upon a second group of people standing around an intact UFO. He said the brush was knocked down indicating the craft had skidded across the ground and came to rest nosed into a natural berm with the back side slightly off the ground.

The welder said he was ordered to cut a hole in the circular craft – 25 feet/7.6 meters in diameter with a round dome - through metal that seem thin but was unusually strong and returned immediately to its original form when bent. Inside the craft he says he say two small beings that were doubled over and appeared to be dead.

They were wearing what he said were skin tight purplish flight suits that reminded him of sequins. He said that after he was debriefed he was told that he was not to talk about what he had seen as it was a state secret and if he was caught divulging anything he would spend the rest of his life in prison or worse.

The engineer said he was introduced to the welder by a friend who had heard he was at the university investigating UFOs and interviewing witnesses and had a friend (the welder) with an interesting story. As far as he knew, they were the only ones the welder shared his story with before his death in the late 1980s.

OK, the story so far sounds like a familiar Roswell story and is unfortunately vague, lacking names, photographs, etc. However, another interesting revelation came from the beginning of the interview.

He began by stating that the week before the 4th of July flying saucers would fly over the base in pairs every once in a while. He said they were circular and had a large dome on the top. They were flat on the bottom and were silent. He assumed they were some technology obtained from the Germans. He said everyone working there called them "flats."

Now there’s something worth looking into. Were there “flying saucers” commonly seen by many at the Roswell Air Force base prior to the crash? If so, where did they go after the crash? Are any of the details given by these anonymous friend-of-friend-of-a-friend witnesses legitimate? Why did the engineer wait so long to tell the story to MUFON? What did they tell him?

That last question is the only that can be answered and the engineer himself gave it.

I have shared my knowledge of this interview with a couple of investigators but I think they doubted my credibility.