A large and mystery-filled mountain in a Scottish range called the Cairngorms, Ben Macdui is said to be the lair of a sinister entity known as the Big Grey Man (BGM). Legends of its existence date back centuries, and they show no signs of stopping. The Big Grey Man reputedly possesses paranormal powers that allow it to plunge the unwary traveler into states of terror and panic. A form of monster-based mind-control, one might be justified in suggesting. Without doubt, the foremost expert on the BGM is anomalies expert, Andy Roberts.

Andy has noted that witnesses to the creepy phenomenon describe how they have heard heavy footsteps on the often fog-shrouded mountain, felt a distinct sensation of a threatening presence, and experienced an overwhelming feeling of unbridled terror. The experience is graphic enough to compel witnesses to flee – in fear of their lives – and, in some cases, to run wildly and in crazed, fear-filled fashion for miles. Taking into consideration the fact that encounters almost exclusively take place on rocky, dangerous ground, and often in weather conditions involving mist and snow, Andy stresses that “we should not underestimate the power of the experience.”

As far as can be determined, the first encounter of any real note with the BGM occurred in 1791. The witness was a poet and shepherd named James Hogg. He reported seeing a massive figure on Ben Macdui, which appeared to manifest out of a strange halo. Says Andy: “As he watched the halo which had formed around him due to the combination of sunshine and mist he suddenly noticed a huge, looming figure. It was vaguely human in shape and he imagined it to be the devil. Hogg fled in terror, not stopping until he reached fellow shepherds.”

Moving onto the 20th century, in 1921, the Cairngorm Club Journal reported that a recent letter-writer “...called attention to a myth prevalent in Upper Deeside to the effect that a big spectral figure has been seen at various times during the last five years walking about on the tops of the Cairngorms. When approached, so the story goes, the figure disappears.”

In 1925, Professor Norman Collie revealed the facts concerning his very own encounter with the Big Grey Man, decades earlier. Collie recalled, in Volume 15 of the Cairngorm Club Journal: “I was returning from the cairn on the summit in a mist when I began to think I heard something else than merely the noise of my own footsteps. For every few steps I took I heard a crunch, and then another crunch as if someone was walking after me but taking steps three or four times the length of my own. I said to myself: This is all nonsense. I listened and heard it again but could see nothing in the mist. As I walked on and the eerie crunch, crunch, sounded behind me I was seized with terror and took to my heels, staggering blindly among the boulders for four or five miles nearly down to Rothiemurchus Forest. Whatever you make of it I do not know, but there is something very queer about the top of Ben Macdui and I will not go back there by myself, I know.”

A man named Alexander Tewnion told of his very own encounter with the terrifying thing of Ben Macdui in the 1940s: “In October 1943 I spent a ten day leave climbing alone in the Cairngorms. One afternoon, just as I reached the summit cairn of Ben MacDui, mist swirled across the Lairig Ghru and enveloped the mountain. The atmosphere became dark and oppressive, a fierce, bitter wind whisked among the boulders, and an odd sound echoed through the mist - a loud footstep, it seemed. Then another, and another. A strange shape loomed up, receded, came charging at me! Without hesitation I whipped out the revolver and fired three times at the figure. When it still came on I turned and hared down the path, reaching Glen Derry in a time that I have never bettered. You may ask was it really the Fear Laith Mhor? Frankly, I think it was.” Tewnion's account appeared in The Scots Magazine in 1958.

Cryptozoologist Dr. Karl Shuker says: “Even more incredible, however, was the entity reportedly spied one night on Ben MacDui by a friend of climber-writer Richard Frere. Having pitched a tent beside the Cairn, Frere’s friend awoke, to see a brown shape standing between his tent and the moon. So as soon as the shape moved away, his friend peered outside his tent, only to discover (according to Frere’s subsequent description, which follows) that just 20 yards away...”

“...a great brown creature was swaggering down the hill. He uses the word ‘swaggering’ because the creature had an air of insolent strength about it: and because it rolled slightly from side to side, taking huge measured steps. It looked as though it was covered with shortish, brown hair…its head was disproportionately large, its neck very thick and powerful. By the extreme width of its shoulders compared to the relative slimness of its hips he concluded its sex to be male. No, it did not resemble an ape: its hairy arms, though long, were not unduly so, its carriage was extremely erect.” 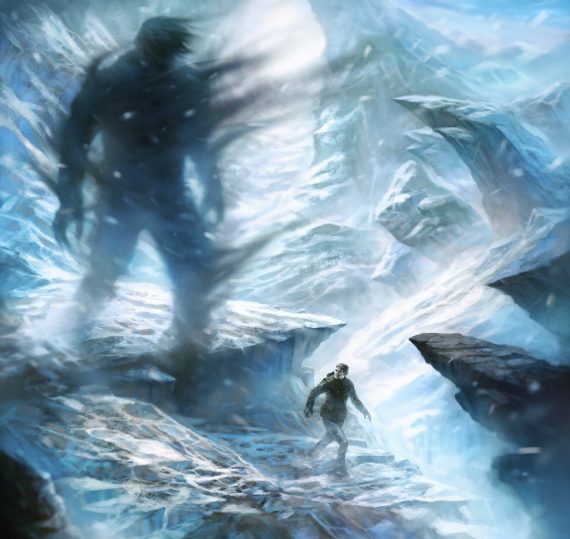 From September 2006, we have the following from someone using the pseudonym of Big Max. “I was climbing back down Ben MacDui in May 1988 when I experienced the footsteps phenomenon mentioned by others. It was pretty misty and I was alone. But it was like ‘something’ was behind me, only 10 meters or so, keeping track of me. I back-tracked to see if anyone was there. I didn’t see anything, but it was weird enough to scare me, particularly as the sounds occurred both when I was moving or stationary. It was only after I told this story to a Glasgow cousin years later that I first heard about the Grey Man.”

As for what the Big Grey Man may be, Dr. Karl Shuker says: “During the 1970s, inorganic chemistry specialist Dr. Don Robins proposed that some minerals may be capable of encoding a type of electrical energy, in turn yielding a moving image that could be projected under certain specific conditions, i.e. a veritable geological hologram. Could it be that the BGM is one such hologram, stimulated by certain specific, mountain-related mineralogical attributes, and exhibiting an additional aural component?”

Or, might it be something akin to the so-called Brocken Specter phenomenon? Weather Online says of this particular phenomenon: "The Brocken specter (or Brocken bow) is an apparently greatly magnified shadow of an observer cast against mist or cloud below the level of a summit or ridge and surrounded by rainbow colored fringes resulting from the diffraction of light. The effect is an illusion. Depth perception is altered by the mist, causing the shadow to appear more distant and to be interpreted as larger than normally expected."

For many, the mystery of Ben Macdui’s Big Grey Man lives on. For others, it's just a shadow. Albeit it an imposing one!