River of Molten Iron Found Flowing Under Alaska and Siberia

This jet of liquid iron is moving at about fifty kilometers per year. That might not sound like a lot to you on Earth's surface, but you have to remember this a very dense liquid metal and it takes a huge amount of energy to move this thing around and that's probably the fastest motion we have anywhere within the solid Earth.

That’s Dr. Chris Finlay from the National Space Institute at the Technical University of Denmark introducing the world to a newly discovered, 420 km (260 miles) wide, steaming hot (over 8,500 degrees F) “jet stream” of molten iron flowing 3,000 km (1865 miles) below the surface of the Earth under Alaska and Siberia. According to the report Finlay co-authored in Nature Geoscience, it’s not just fast (in molten iron terms) but getting faster – tripling in speed since 2000. Not only that, it’s changing directions and heading at over 45 km per year towards Europe. Is this good news or bad news?

The discovery of this jet stream of molten iron began in 2013 with the European Space Agency’s launch of the Swarm mission – three satellites placed in two different polar orbits to measure the Earth’s magnetic field in great detail. The first indication something was amiss at the Earth’s core was when researchers analyzing the Swarm data noticed “strange 'lobes' of magnetic flux beneath Alaska and Siberia.”

How did looking at the magnetic field tell researchers about the iron river near the planet’s core? Project leader Phil Livermore explains that the lobes are like lit candles on a river that show its direction of flow in pitch darkness.

As the iron moves, it drags the magnetic field with it. We can’t see the flow of iron itself, only the motion of the flux lobes. 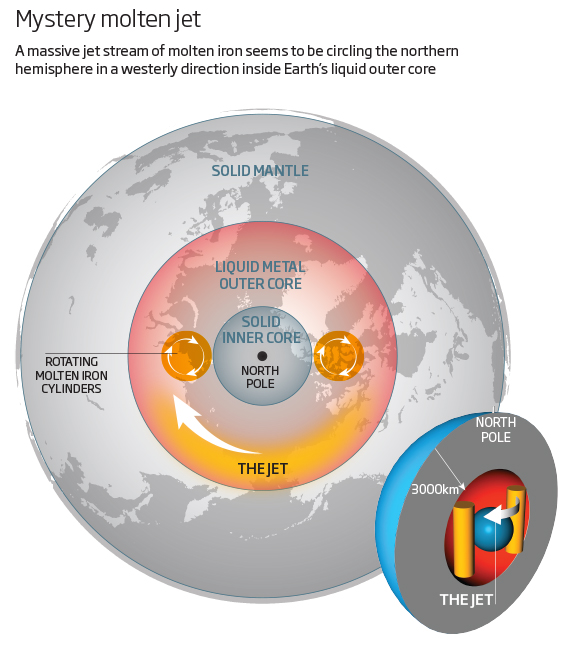 Back to the question … is this good news or bad news? The cause of the change in speed is a mystery. Livermore thinks it the iron river may be getting a push-back from the magnetic field. Another mystery is how this change relates to both the gradual weakening of the Earth’s magnetic field and the slow trudge towards a possible flip of the magnetic north and south poles. While there’s no way to drill down to the iron jet stream to affect its flow, a better understanding of its purpose, if any, in the flip will make predictions easier and more accurate.

Further surprises are likely. The magnetic field is forever changing, and this could even make the jet stream switch direction.

In the meantime, Strange Lobes of Magnetic Flux would be a great name for a metal band.