Our relationship will get better and better as technology evolves.

If a robot played that line on you in a bar, would you go home with him (it)? While it sounds like a pickup line, it’s actually how a self-proclaimed “proud robosexual” woman describes her bond with a robot she made herself using a 3D printer … a robot she plans to wed once robot-human marriage is legal in France.

Setting the legal, sexual and psychological aspects aside for a moment, lets look at what “Lilly” (no last name given to protect her identity from those who object to robot-human relations) made for herself. The ImMoovator robot was built using open-source files and 3D-printing instructions developed by French designer Gael Langevin and available on his InMoov website. All she needed was a home 3D printer with a 12x12x12 inch area. The website claims “You will learn making it” but recommends that those who have no experience with servomotors or an arduino electronic prototyping platform should begin with the “finger starter kit.” (Insert your own robot sex joke here).

Moving on to the “Why?” question, Lilly says in an interview that she realized at age 19 that she was only attracted to robots and that two relationships with men confirmed it. Before you suggest she try some other sexual orientation, Lilly says she really dislikes physical contact with human flesh.

If you're thinking that there might be something psychologically wrong with Lilly’s attraction to a robot, the presenters and attendees at the recent Second International Congress on Love and Sex with Robots will strongly disagree. Robotics expert David Levy, a speaker at the conference, says Lilly is actually on the cutting edge.

If you think love and sex with robots is not going to happen in your lifetime, I think you're wrong. The first human robot marriages will take place around the year 2050 or sooner but not longer. 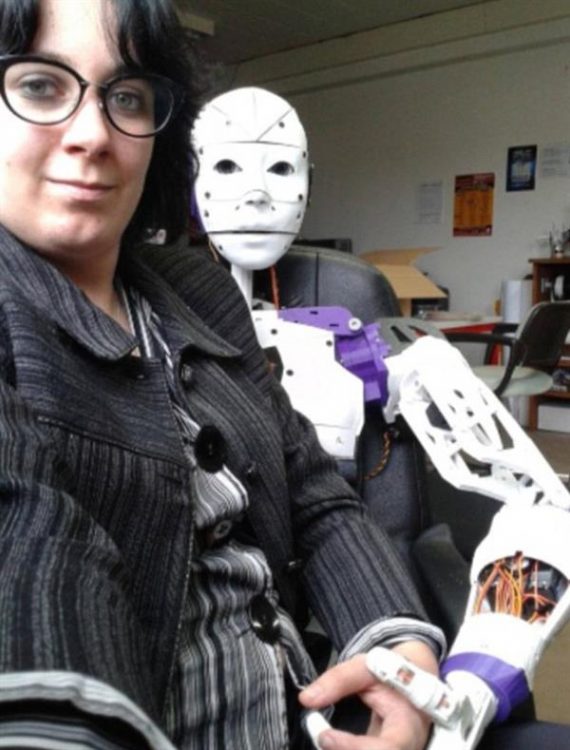 Can Lilly and her Significant Bot wait that long? Although Lilly seems to be happy (the robot's expression doesn’t change), she admits  that she’s studying to be a roboticist and says that things will get better with technological advances. If she needs some ideas or inspiration on future enhancements to her InMoov fiance, perhaps she should consult with University of London Computing Professor Adrian David Cheok, who spoke at the conference about humans having sex with robots.

It’s going to be so much easier, so much more convenient to have sex with a robot. Actual sex with humans may be like going to a concert. When you’re at home you can listen to Beethoven’s ninth symphony, it’s good enough and once or twice a year you’ll want to go the Royal Albert Hall and hear it in a concert hall. That’s going to be the future. That we will have more sex with robots and the next stage is love … we’re already seeing it.

For those of you panting and drooling, the InMoov web site is https://inmoov.fr/.

Search for Dark Matter Leads to Australian Gold Mine