London fog gets all of the good press and prestigious trench coat endorsements but there’s some strange things happening with the mist over the rest of Great Britain. Last month there was a rare white rainbow or fogbow over Scotland. Now a weather watcher in Wales has witnessed something even wilder – a strange foggy dome covering part of the village of Tremeirchion. If they haven’t seen The Truman Show or read Under the Dome, now might be a good time. Or is it too late? 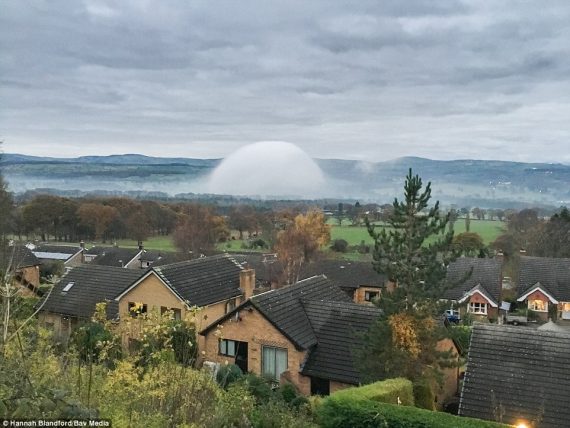 Hannah Blandford is an official BBC Weather Watcher, which means she signed up on the site and uploads pictures and observations of the weather where she’s at. December 2nd’s post should put her on track to be Weather Watcher of the Year (if there isn’t an award, there should be) for her photograph of a strange and extremely rare fog dome.

I couldn’t believe how perfectly dome shaped it was, it looked amazing, so I had to take a photo. I’d never seen anything like it before, it was really quite special. I watched it for about 10 minutes and then the dome started to flatten and it looked like very thick low lying cloud. It spread out across 12 fields and covered a huge area.

Her post of the photo on social media went viral and generated all of the usual Internet speculation of aliens, UFOs, government weather experimentation and the like. Fortunately, the BBC is watching the watchers and Met Office and BBC Weather Centre Forecaster John West jumped in with a more meteorological explanation.

This is a very unusual phenomenon, but the most likely explanation is that the "fog dome" has been caused by a source of heat close to the ground, possibly an agricultural building or a relatively warm pool of water. As the fog has formed in the valley this heat source has forced the fog to lift away from the ground into a dome as warmer air rises; like a hot air balloon.

How unusual is a fog dome? They're so rare, Wikipedia doesn’t even have an entry for one. A search for images online brings up Hannah’s and pictures of purses. Really! What’s up with that? 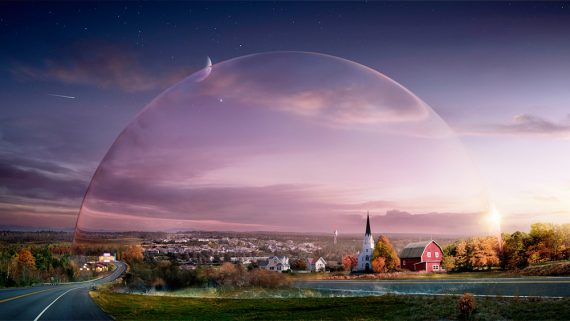 Which begs the question … was the foggy dome that Hannah saw really a 'fog' dome? Has anyone talked to the people who were under it or checked the fields for crop circles or dead cows with their blood drained? Is there an information dome blocking news of the fog dome? How would we know?