Why There Are No Talking Monkeys

Why can’t monkeys talk to humans? Because we don’t listen. Next question!

Oh, you want the scientific reason. Ask a monkey - if you can find one with a really, really big brain. A new study has determined that monkeys have the vocal ability to talk but they don’t because they’re lacking the mental ability to say, “Stop calling me Cheeta and pass the bananas.”

William Tecumseh Sherman Fitch III, an evolutionary biologist and cognitive scientist at the University of Vienna, and Asif Ghazanfar, a neuroscientist at Princeton University, co-authored the study published recently in Science Advances. They pondered the question that baffles every zoo visitor who watches monkeys and apes do so many things that humans do – except talk – while parrots do nothing that humans can do except talk. Most anthropologists believe it’s because primates have problems with their vocal tracts. Charles Darwin believed it was because they had under-developed brains. Fitch and Ghazanfar decided to side with Darwin and set out to prove him right. 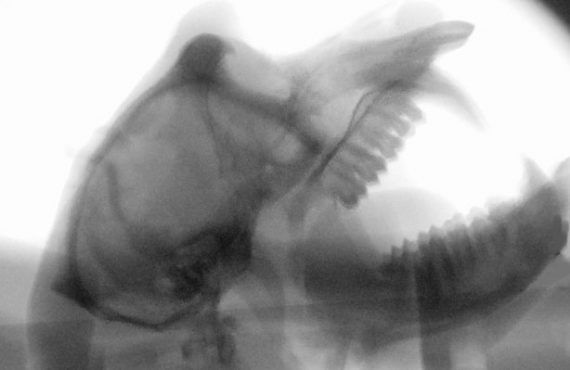 Their silent partner in the experiment was Emiliano, a long-tailed macaque from Princeton’s primate lab. The team trained Emiliano to sit in a chair while his head and throat were x-rayed as he made monkey sounds, ate, yawned, moved his lips and did other activities using the body parts humans use for speaking.

Next, they compared the 99 different configurations of Emiliano’s vocal anatomy with those of humans speaking the five vowels (you know what they are) and determined that he could theoretically make the sounds with the equipment that he had. They even used a computer to simulate what Emiliano would sound like saying human phrases like “Will you marry me?”.

While Emiliano got no dates with that pick-up line, he did prove that he could say it if … if what? Professor Ghazanfar thinks it’s a brain thing.

Now nobody can say that it’s something about the vocal anatomy that keeps monkeys from being able to speak – it has to be something in the brain. Even if this finding only applies to macaque monkeys, it would still debunk the idea that it’s the anatomy that limits speech in nonhumans. Now, the interesting question is, what is it in the human brain that makes it special?

By ‘special’, he means the human brain has some complex neural circuits that take the same equipment humans share with monkeys to perform the act of speaking

After all, producing a vocalization requires the coordination of respiration, vocal fold tension and shaping your mouth in particular ways (all at the same time)…and producing speech requires doing that in long sequences of such coordination.

Professor Fitch believes anthropologists searching for the spot in human evolution when speech developed should look for when the genes that control speech first appeared.

That’s when Darwin might agree that the first pickup line was heard.