“A Strange and Monstrous Serpent or Dragon”

Prepared and published in the early part of the 17th century (specifically in 1614) by London, England-based John Trundle, is a document which tells a story that is both intriguing and puzzling. Its title is a long one, to say the least. Take a deep breath: "True and Wonderful, A DISCOURSE Relating A STRANGE AND MONSTROUS SERPENT OR DRAGON Lately Discoyered and yet living to the great Annoyance and divers Slaughters both Men and Cattell, by his strong and violent Poyson. In Sussex, two Miles from Horsam, in a Woode called St. Leonards Forrest, and thirtie Miles from London, this present Month of August, 1614."

The story the document tells of revolves around an ancient English town called Horsham. In its old English-style (which I have left intact and unchanged) it begins as follows: "In Sussex, there is a pretty market-town called Horsham, near unto it a forest, called St. Leonards forest, and there, in a vast and unfrequented place, heathy, vaulty, full of unwholesome shades, and overgrown hollows, where this serpent is thought to be bred ; but, wheresoever bred, certain and too true it is that there it yet lives.

"Within three or four miles compass are its usual haunts, oftentimes at a place called Faygate, and it hath been seen within half a mile of Horsham, a wonder, no doubt, most terrible and noisome to the inhabitants thereabouts. There is always in his track or path left a glutinous and slimy matter (as by a small similitude we may perceive in a snail's) which is very corrupt and offensive to the scent, insomuch that they perceive the air to be putrified withal, which must needs be very dangerous.

"For though the corruption of it cannot strike the outward part of a man, unless heated into his blood, yet by receiving it in at any of our breathing organs (the mouth or nose) it is by authority of all authors, writing in that kind, mortal and deadly, as one thus saith: Noxia serpentum est admixto sanguine pestis. The serpent, or dragon, as some call it, is reputed to be nine feet, or rather more, in length, and shaped almost in the form of an axletree of a cart, a quantity of thickness in the midst, and somewhat smaller at both ends. The former part, which he shoots forth as a neck, is supposed to be an ell long, with a white ring, as it were, of scales about it [Note: an ell, in the words of The Free Dictionary, is: 'Any of several historical units of measure, originally based on the length of the arm or forearm but later standardized at other lengths, such as the English ell of 45 inches (114 centimeters)']."

"The scales along his back seem to be blackish, and so much as is discovered under his belly appeareth to be red; for I speak of no nearer description than of a reasonable occular distance. For coming too near it hath already been too dearly paid for, as you shall hear hereafter. It is likewise discovered to have large feet, but the eye may be there deceived; for some suppose that serpents have no feet, but glide upon certain ribs and scales, which both defend them from the upper part of their throat unto the lower part of their belly, and also cause them to move much the faster.

"For so this doth, and rids way, as we call it as fast as a man can run. He is of countenance very proud, and, at the sight or hearing of men or cattle, will raise his neck upright, and seem to listen and look about, with arrogancy. There are likewise on either side of him discovered two great bunches so big as a large foot-ball, and, as some think, will in time grow to wings; but God, I hope, will defend the poor people in the neighbourhood, that he shall be destroyed before he grow so fledged. 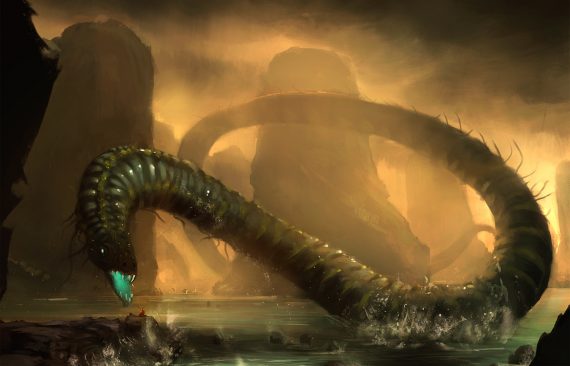 "He will cast his venom about four rod from him, as by woeful experience it was proved on the bodies of a man and woman coming that way, who afterwards were found dead, being poisoned and very much swelled, but not preyed upon.

"Likewise a man going to chase it and, as he imagined, to destroy it, with two mastiff dogs, as yet not knowing the great danger of it, his dogs were both killed, and he himself glad to return with haste to preserve his own life. Yet this is to be noted, that the dogs were not preyed upon, but slain and left whole; for his food is thought to be, for the most part, in a cony- warren, (rabbit warren) which he much frequents, and it is found much scanted and impaired in the increase it had wont to afford.

"These persons, whose names are hereunder printed, have seen this serpent, beside divers others, as the carrier of Horsham, who lieth at the White Horse, in South wark, and who can certify the truth of all that has been here related. JOHN STEELE. CHRISTOPHER HOLDER. And a Widow Woman dwelling near Faygate."

What was a mystery in the early 17th century remains a mystery today.