It looks kind of baggy and wrinkly. It has a big mouth and a round body and has a difficult time going to the bathroom. If this sounds like your old Uncle Harry, you may be right … if by ‘old’ you mean 540 million years old. Researchers in China have discovered a baggy sea creature they believe is the oldest known prehistoric ancestor of humans.

We think that as an early deuterostome, this may represent the primitive beginnings of a very diverse range of species, including ourselves. To the naked eye, the fossils we studied look like tiny black grains, but under the microscope the level of detail is jaw-dropping.

Simon Conway Morris, professor of evolutionary palaeobiology at the University of Cambridge, points out that the creature, appropriately named Saccorhytus coronaries – ”saccus" is Latin for sack and "rhytis" is Greek for wrinkle – looks like a tiny black grain. In fact, the millimeter-long microfossils were somehow found while digging through 3 tons of limestone. Fortunately, they were well-preserved so that an electron microscope and a computed tomography (CT) scan could magnify their unusual characteristics … like the fact that Saccorhytus coronaries has no anus.

If that was the case, then any waste material would simply have been taken out back through the mouth, which from our perspective sounds rather unappealing.

Indeed. In his study, published this week in the journal Nature, Conway Morris notes that deuterostomes are the ancestors of vertebrates, sea squirts, echinoderms (starfish and sea urchins) and hemichordates (a family of acorn worms). Their bilaterally symmetrical bodies (the balanced distribution of body parts so that they somewhat match (mirror image) on either side is a characteristic that humans still retain. They also appear to have had flexible skin and muscles to shovel food into the big mouth with no exit strategy. 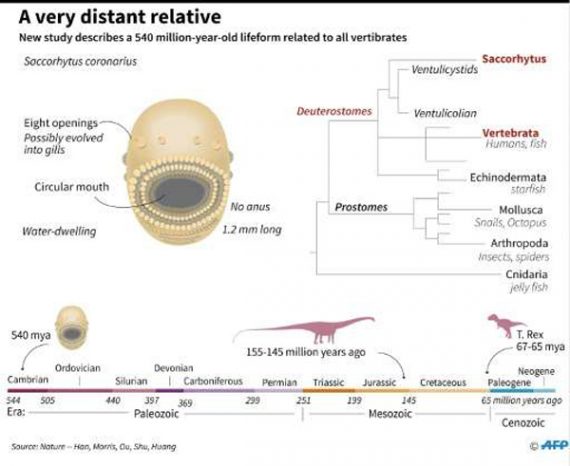 Their tiny size is what makes this a truly exciting discovery for Conway Morris. It means that there could be even smaller ancestors of Saccorhytus coronaries (and humans) too tiny to be fossilized.

The question here of course is: is it possible that there is a deep cryptic history that has almost entirely eluded discovery because these things are absolutely tiny?

It’s hard to believe humans could have evolved from something so tiny and still retained the bilateral symmetrical structure. While it would have been nice to not have retained the baggy, wrinkly bodies, it’s good that we got past that no-anus stage.