On June 30th, 1908, a massive explosion rocked a remote area of Siberia near the Podkamennaya Tunguska River, leveling trees for 1,000 square miles and creating a mystery that has become known as the Tunguska Event. What caused such destruction? Most experts believed the area was hit by a comet or a meteor, with comet becoming the accepted explanation since no crater nor meteorite fragments were ever found. A melting and subsequently vaporized ice-ball comet would leave no such evidence. 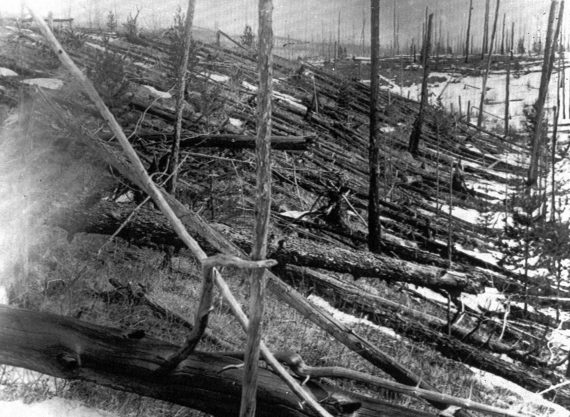 That explanation was accepted until 2012 when an Italian research team released the results of two explorations of Lake Cheko, a shallow body of water about five miles from the center of the Tunguska Event. A seismic report from 1999 showed something large and unidentified at the bottom of the lake, buried under what was about 109 years worth of sediment. Doing the math, they concluded it could be a Tunguska meteorite. A check of old maps showed no Lake Cheko in the area prior to 1908. Return trips in 2009 and 2102 to collect more evidence and conduct a magnetic survey seemed to confirm there was something in the lake and they believed it was enough evidence to conclude the cause of the Tunguska Event was a meteor. All they needed was a piece of the rock.

In 2016, Russian researchers decided it was time to solve the mystery themselves. Scientists took core samples from the deepest trench in Lake Cheko, performed geochemical and biochemical analyses and then sent the samples to the Institute of Geology and Mineralogy, Siberian Branch of The Russian Academy of Sciences (RAS) for radioscopic analysis. Their results will be published on the anniversary of the event on June 30th, but in a press release this week, they let the catastrophe out of the bag.

The study showed that the deepest sample is about 280 years old, which means that the lake is probably even older, because the researchers did not manage to obtain samples from the very bottom. Nevertheless, this proves that Lake Cheko is much older than the Tunguska event and is not an impact crater of a supposed Tunguska meteorite impact.

What about the lack of a Lake Cheko on maps prior to 1908? The area is pretty remote and no one actually did a lot of detailed exploring and mapping there until after the explosion. If it’s not the Tunguska meteor, what’s at the bottom of the lake? That will have to wait for another expedition with a longer drill.

What caused the Tunguska Event? Until someone finds a crater or a piece of meteor, it will continue to be a mystery.