Elephant-Sized Extinct Cattle Being Brought Back in England

Someday soon you may wish you hadn’t complained so loudly about your neighbor’s dog digging in your garden. A project designed to bring elephant-sized cattle back from extinction is approaching its goal – which is not just to bring back the monstrous bulls and cows but to re-introduce them into the wilds of Britain. Is this a good idea? If you have any spare money, you may want to buy stock in steel fence companies.

Wild cattle are one of the species that shaped the European landscape over hundreds of thousands of years. If there are no large herbivores then the forest regenerates very fast. Big grazing animals keep patches of land open and create variety in the landscape which helps many thousands of species of plants, insects and animals.

Well, that’s the plan according to Wouter Helmer, founder of Rewilding Europe, a project to reintroduce lost species in parts of Europe, either by bringing them in from other parts of the world or by bringing them back from extinction using DNA. The lost species of cattle is the auroch, a monstrous breed that once roamed Europe, Asia, and North Africa until they were hunted to extinction, with the last dying in Poland’s Jaktorów Forest in 1627.

Hitler’s geneticists tried to bring back the massive aurochs - weighing up to 3,300 pounds and standing at least 7 feet tall – via cross-breeding known descendants. A farmer in England ended up with a few of those cattle but had to destroy them because they evolved into “killers.”

Since 2009, a program called Operation Tauros has been extracting DNA from Italian Maremmana and Podolica cattle and Balkan Busha cattle because they are closest to the DNA of aurochs. As each generation is born, DNA is extracted to make the next generation even more like the aurochs. Professor Donato Matassino of Operation Tauros says they are now very close to the original species.

Why has everyone from Hitler to environmentalists been trying to bring back the aurochs?

Their strength and speed are extraordinary; they spare neither man nor wild beast which they have espied.

No, that’s not it. That’s a quote from Julius Caesar describing aurochs during his time. The bull has been a popular symbol throughout history and it’s believed the animals drawn on prehistoric cave walls were aurochs, so there’s an obvious connection to the past, coupled with a possible forgiveness for humans hunting yet another species into extinction. 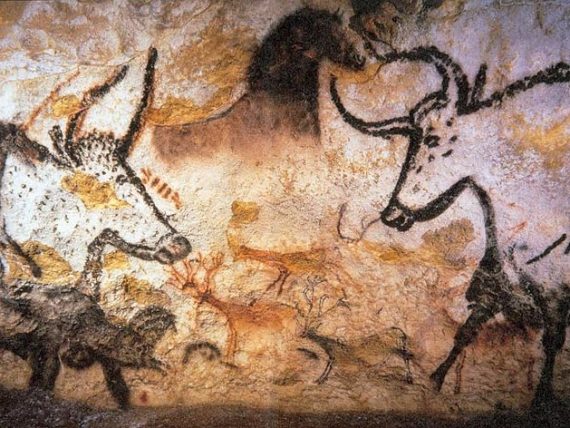 But releasing them into the forests of Great Britain just so trees and grass grow better? Have you looked at the size of British cars, not to mention British drivers? Wouldn’t it be better to bring back something that can be raised in a backyard and goes with chips?

Is this a good idea? Rewilding Europe isn’t saying exactly when or where the aurochs will be released. Perhaps they already know the answer.