ESA Announces Plans to Build a Temple on the Moon

While a group of college students is figuring out a way to brew beer and get drunk on the Moon, the European Space Agency is planning a place where repentant astronauts will be able to confess their sins of drunken debauchery. The ESA’s artist-in-residence (does NASA have one of these?) announced plans last week for a “Moon Temple” next to the first 3D printed base on the lunar surface. 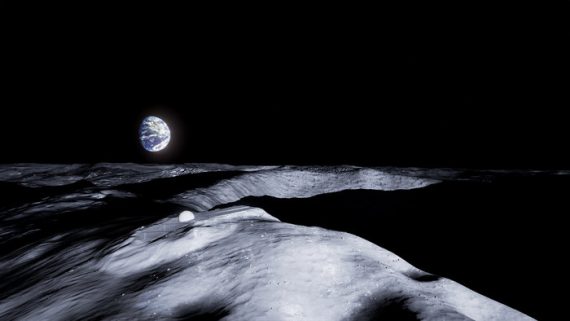 Lunar settlement represents a perfect chance for a fresh start, a place where there are no social conventions, no nations and no religion, somewhere where these concepts will need to be rethought from scratch.

Let’s hope these things aren’t being rethought on the Moon because there’s nothing left of them on Earth. Jorge Mañes Rubio is not just the ESA’s artist – he’s a member of the Advanced Concepts Team (ACT) think tank that researches emerging and future science technology for the agency. That means contemplating questions about future space travelers, like:

What kind of social interactions will they share, what cultural activities and rituals will they have, and what sort of art and artifacts will they be producing?

Rubio calls his lunar spiritual center a “temple” but he’s not limiting it to just religions that refer to their places of worship as “temples.”

So this Temple is intended as a mythic and universal structure that can hopefully bring people together in this new environment in novel ways.

Where is this new temple's environment? The ESA is looking at the Shackleton Crater at the Moon’s south pole because its rim is in nearly continuous sunlight while the inside is always in shadows, giving it the perfect combination of warmth for living and cold for ice which will provide water and fuel.

Rubio envisions the Moon Temple on the crater’s rim under a 50-meter-high dome. The dome will have openings facing towards Earth and away from it and the temple will be illuminated by sunlight. A telescope will be on the floor for those who need help staring off into space. To keep lunar residents from getting homesick, Rubio chose Shackleton instead of Malapert Crater because Earth is only visible from Shackleton for two weeks at a time.

Will Jorge Mañes Rubio be able to build his non-denominational, non-religion Moon Temple or will religious groups on Earth fight to be the first religion on the Moon? What if humans get to the Moon and there’s already a church there? What if it’s not an Earth church?

Bizarre Encounters with the Weird in the Vietnam War