That doesn’t rhyme nor does it make much sense but it’s as good as any of the other explanations for what appears to be a giant staircase seen in a satellite image of Antarctica. If they were closer together, it could possibly be a back entrance into what appears to be an under-the-ice manmade oval building similar to a medieval castle or fortress seen in another image. Do either of these anomalies change everything or nothing about we know of Antartica?

Copies of the Google image of the alleged giant staircase are flying around the Internet. What is agreed on by most viewers is that it definitely looks like a giant staircase in the snow, although it also looks remotely like a giant tire tread. The location is said to be “just off the coast of Antarctica,” which narrows it down to anyplace just off the coast of Antarctica. Since it’s not in the water, this must mean at the edge of the coast or on an ice shelf.

That’s about it. The identity of the person who found it isn’t revealed on any web or social media sites. The lack of info opens the door for the usual speculation that it’s a UFO landing or crash site, a Nazi base, a staircase down to Atlantis or – since there’s been some alleged pyramid sightings in Antarctica recently – a staircase up the side of a snow-covered pyramid for people or aliens with extremely long legs. 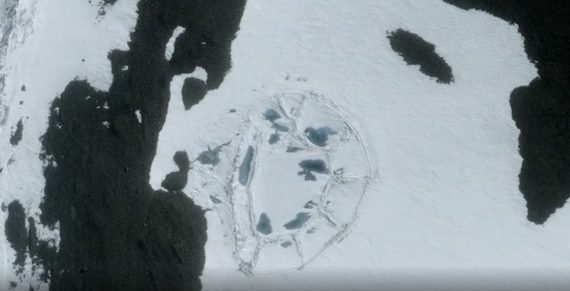 Could it be related to the mysterious underground oval? A Google image of this 400-foot (121 meter) wide oval popped up at about the same time as the alleged staircase. It appears the photo was taken in 2012 over the middle of Eastern Antarctica. That puts it far from the coast so it’s nowhere near the giant staircase. Initial speculation was that this outline out lyin' in the middle of a frozen plain was a sastrugi – large grooves or ridges in the snow formed by wind and erosion. Since sastrugis are usually more linear than circular, a popular alternate theory proposed is that the image shows the outline of a buried building from a civilization living in Antarctica before it froze over.

The only expert weighing in on the oval is Ashoka Tripathi of the Department of Archaeology at the University of Calcutta, whose name also pops up on a hoax warning site because the photograph given of him is actually someone else.

So what do we have? A Google image of something that resembles a giant staircase with no other explanatory and another image of what could be wind damage or an underground structure that has questionable verification. Nothing is changed.

There’s no lady who’s sure
Of the fort in the cold
And no one’s buying the stairway in Antarctica.