The Internet loves spiders, snakes and shocking photos so the latest pictures from Brazil of a huge tarantula eating a 15-inch snake is a triple-viral-score. Not only that, entomologists and animal researchers (although not herpetologists) are exited because this is the first known evidence of a tarantula eating a snake in the wild. The only thing better would be if the last photo was of the tarantula being eaten by a kitten!

To the best of our knowledge, we present here the first documented case involving the predation of a snake by an individual of the Theraphosidae family in nature.

That’s the gripping description of "Predation of the snake Erythrolamprus almadensis by the tarantula Grammostola quirogai," the report in Herpetology Notes written by the researchers from Brazil's Universidade Federal de Santa Maria who stumbled up the grisly spider-snacking-on-snake scene while studying tarantulas in the Serra do Caverá in the far south of Brazil. 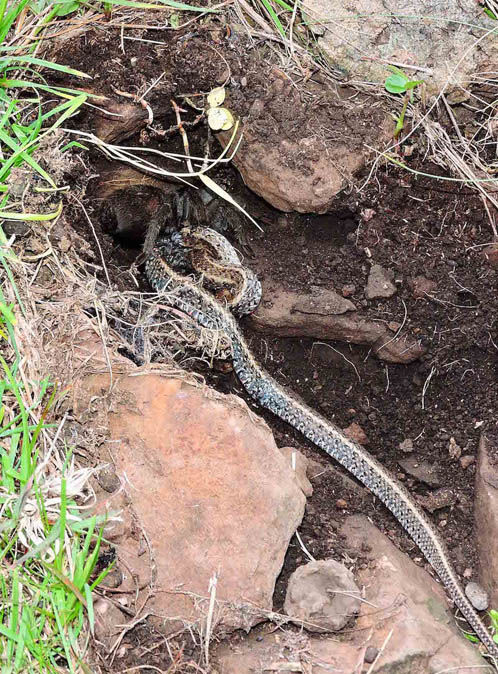 The hand-sized tarantula was a Grammostola quirogai which is native to tropical South America. The snake was an Almaden ground snake (Erythrolamprus almadensis), also native to South America. While venomous spiders such as black widows are known to capture snakes in their webs and kill them with their bite before eating them, tarantulas don’t spin webs and their venom isn’t believed to be strong enough to kill a snake, especially one so much bigger in size. What made this particular tarantula the first to try snake?

Luck. The researchers believe the snake accidentally slithered under the rock already occupied by the tarantula, which used the confined space to corner the snake, attack it with its 2 cm (0.8 in) fangs and eventually kill it. That’s just a theory since, by the time they lifted the rock, this is what they saw.

The snake (snout-vent length 390.60 mm) was found dead, with severe damage to the anterior and middle regions of its body. The spider was feeding on these areas; therefore, they were in an advanced stage of decomposition due to the extracorporeal digestion process carried out by this arachnid.

If you’re feeling sorry for the snake … don’t. Another set of photos and a video going viral at the same time show a 13-foot (4 meter) scrub python (Morelia amethistina) swallowing an entire wallaby and its joey in North Queensland, Australia.

According to Bernie Worsfold, who captured the scene on video, the snake took several hours to swallow the wallaby while he tried unsuccessfully to rescue the joey.

New Theory Suggests the Moon is Made of Many Mini Moons