If there’s something strange in your neighborhood, who are you gonna call? If your neighborhood is in Florida and the 'something strange' is Burmese pythons, the best people to call are a couple of snake catchers from India because they ain’t afraid of no snakes, no matter how big they are. Not only that, they outwit, outlast and outplay the Everglades pythons and local hunters too.

Masi Sadaiyan and Vadivel Gopal are members of the Irula people, an Indian tribe traditionally known as rat and snake catchers – probably in that order. Based on that reputation, the Florida Fish and Wildlife Conservation Commission is paying the two 50-something python hunters and their translators $68,888 for two months. The investment is already paying off – in just two weeks they’ve caught 14 pythons, including a female 16-footer. Compare that to last year’s Python Challenge where 1,000 hunters searched for a month and only brought in 106 snakes. 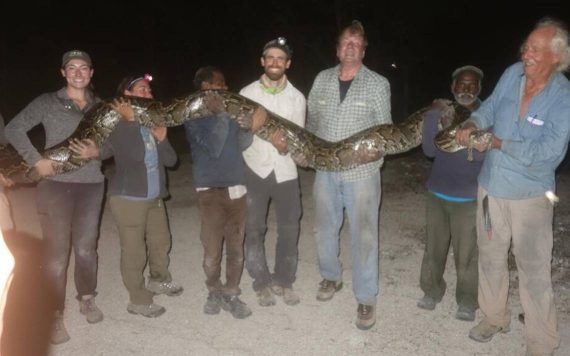 How do Masi and Vadivel do it? They start by going where local hunters won’t – through the dense brush and high grass of the swamp. They use tire irons to cut their path (and protect themselves) and look for signs of snakes … slither marks in the sand, python poop and broken grass from the heavy snakes passing through. These experienced hunters can tell from those signs how big the snake is, its sex and when it was there. All that’s left is to walk softly, carry a big tire iron and get ready to smash some snake.

According to the Miami Herald, much of the credit for bringing in Masi and Vadivel goes to famed herpetologist Romulus Whitaker, who once worked at the Miami Serpentarium and is now a conservationist in India. He helped the Irula tribe, which had hunted pythons to near extinction in India, to switch to hunting cobras for the purpose of collecting antivenin for the country’s serious snakebite problem. If they ain't afraid of no cobras, Florida python-busting should be a piece of cake – even if they’re the big, fat, no-natural-enemies Everglades pythons.

It’s not all work and no play for Masi and Vadivel. Their Florida hosts have taken them out for hotdogs, introduced them to NFL football and held classes for them to pass their snake-hunting skills on to some Floridians. But the next morning, they’re back on the job, says Masi.

Coming to America is really fun and interesting, but catching all those snakes, that’s why we’re here.

Who are you gonna call?