To those who want to be the first Earthlings to travel to Mars, Elon Musk says:

It would be, basically, 'Are you prepared to die?' If that's OK, then, you know, you're a candidate for going.

NASA is not quite so drastic. Based on its newly-unveiled Martian habitat concept, a better question for future Mars travelers might be:

Are you prepared to freeze your butts off?

At a recent brainstorming session at Langley Research Center’s Engineering Design Studio, researchers came up with this unique design.

A large inflatable torus, a shape similar to an inner tube, that is surrounded by a shell of water ice.

That’s right. NASA wants its Mars explorers to live in a giant inner-tube-lined frozen igloo. Before you withdraw your application to astronaut school, you might want to get the details because it’s actually a pretty good idea.

The first benefit of the “Mars Ice House” is ease of construction. A deflated inner tube can be moved around easily by small robots and put into place above ground, avoiding the need for heavy moving and digging equipment.

A second and more critical benefit is that ice is actually an excellent material for blocking cosmic radiation. This can be accomplished even though the ice is translucent, which allows some sunlight to enter the habitat for natural lighting. Since we now know that Mars has ice just below the surface, this is a construction material that does not need to be transported to the planet from Earth.

What about heat? The Mars Ice House would be built with a layer of carbon dioxide gas between the inner tube and the outer ice layer, providing insulation. Carbon dioxide exists on Mars so this is another building material that doesn’t need to be shipped there.

With this simple yet effective design, the Mars Ice House could be built by robots and be ready for the space travelers to move right it. 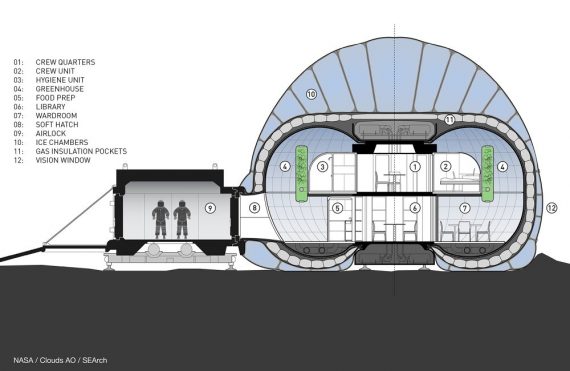 Finally, the Mars Ice House can provide one last benefit once it has served its useful life as a shelter – fuel. The water can be converted into rocket fuel for the Mars Ascent Vehicle which is the first step towards getting a crew back to Earth.

While the Mars Ice House is still in the design phase, it’s quite a design. Throw in a last benefit in that it will make it easy to keep the home-brewed-with-Martian-water beer cold, NASA may have an easier time recruiting crews than that morbid Musk.